Where to go Cycling in North India

India is an adventurers paradise, where exploring a new culture never came so cheap. Often, the big cities get a bad rep due to pollution, overcrowding and too much traffic. From our perspective, a bike is your tool for escaping the madness and discovering the real India. Northern India, specifically Rajasthan, is brimming with culturally rich, incredibly picturesque and less crowded cities. Want to embark on a guided tour, or cycle without aid? We’ve picked out the best places that should be on your list for your adventure cycling in North India.

Ever wondered where jodhpurs came from? Of course you have! The tight trousers worn when riding a horse did indeed get their name from the city of Jodhpur in Northern India. Specifically, jodhpurs were created for the polo team that made their way to the Queen of England in 1897. Now in Jodhpur, polo playing is still popular, but so too are folk festivals and hipster cafes. Yet it’s the blue city of Navchokiya that stands out, as the canvas of blue buildings are a quiet paradise. Spend time exploring the labyrinth of alleyways, or take a bird’s eye perspective and view from the imposing Mehrangarh Fort. 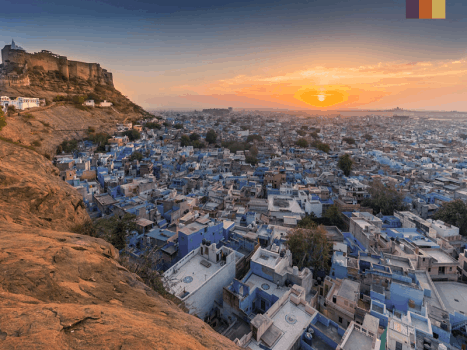 Chandelao is predominantly made up of the historic estate, Chandelao Garh. Built in 1744, the estate is a blast to the past and illustrates typical Rajasthani village life. Because Chandelao is only 40km from Jodhpur, it makes for a leisurely dawdle on your bike off the beaten track. A highlight of Chandelao Garh is staying overnight in the estate’s beautiful homestay. Here the locals will host your experience of traditional Rajasthani cuisine, culture and style. 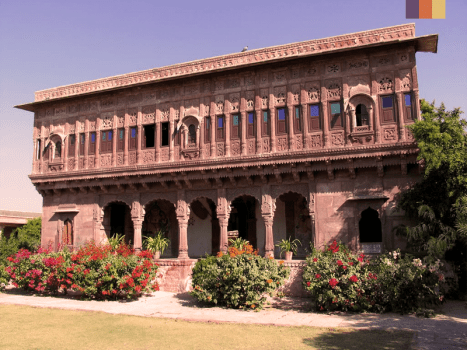 For a dose of religious history, the Ranakpur Temple is a must see if you are travelling between Jodhpur and Udaipar. The temple is built from white marble, and was constructed in the 15th century. Inside and outside of the temple, intricate carvings decorate the walls and 1444 pillars. The Ranakpur Temple is an example of the lavish Maru-Gurjara architecture, which is a style of North Indian architecture, based on Jainism. Audio guides are now available for hire, which provide in-depth information as you explore the temple. Because the distance between Jodhpur and Ranakpur is around 155km, consider stopping in Pali for a night.

Another ancient masterpiece you should visit when cycling in North India is the magnificent Kumbhalgarh Fort. Dubbed the ‘Great Wall of India’, and a UNESCO World Heritage site, the fort was built in the 15th century. It is possible to cycle up to Kumbhalgarh Fort, however there is a fair bit of ascent and the terrain is certainly off road. Once at the fort, your day should be spent wandering the 32 forts and their 360 Jain and Hindu temples. Kumbhalgarh Fort is only 50km away from Ranakpur, and it’s backdrop is the stunning Aravalli mountain range. Additionally, the Kumbhalgarh Wildlife Sanctuary surrounds the fort, where you can spot leopards, sloths and 200 species of bird. 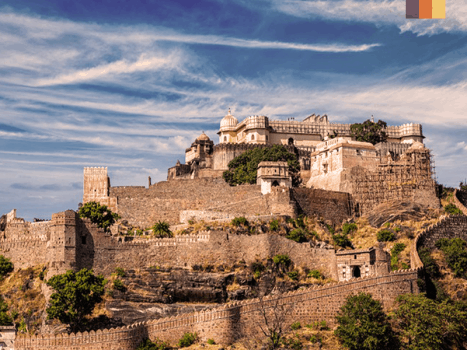 Finally, let us introduce you to one of the most romantic cities in India, Udaipur. Known as ‘Venice of the East’, Udaipur boasts Lake Pichola at its heart, surrounded by palaces and beautiful buildings. In the centre of Lake Pichola sits the Lake Palace, an architectural marvel that was built in 1746. Although the Lake Palace is now a luxury hotel, you can still take boat tours that circle it. Make sure to spend a few days in Udaipur, and cycle out to the lesser known lakes that hug the city. Fateh Sagar Lake is closest, however Badi Lake is arguably more picturesque, and less crowded. 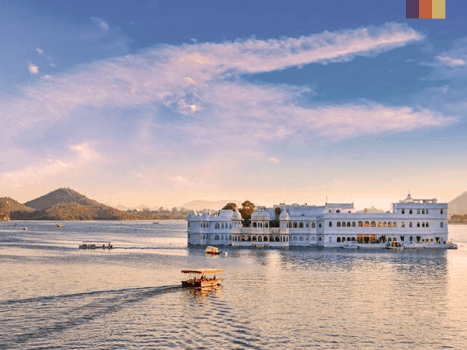 India’s roads can sometimes be busy, or less scenic. Talk to our cycling specialists today to book your place on a guided tour of Rajasthan, where you will be sure to ride the picturesque routes to our favourite locations.