As we draw closer to the conclusion that England are the best footballing nation in the world, the team at Love Velo started thinking about where the best places to cycle were in the world.

This led us to create our own World Cup. A World Cup where, over 4 days, challenging ascents would compete with spiralling hairpins and incredible views would battle against famous Grand Tour routes. The World Cup of Climbs was established.

16 climbs entered the competition that was run on our Instagram story (@love_velo_cycling_) leading to the following eight games being created:

The tournament got off to a great start with all the favourites winning their opening games with ease. Koppenberg knocked out the only UK representative with a landslide victory of 82% to 18% whilst Alpe d’Huez, Mont Ventoux, Stelvio and Mortirolo all comfortably moved onto the next round.

Following the Quarter Finals, Koppenberg built on its strong start whilst Spain lost their last representative in the Sa Calobra. France went into the Semi Finals as strong favourites to take the trophy with Mont Ventoux and Alpe d’Huez both winning with ease. However, Stelvio Pass wouldn’t be an easy game as the famous Italian climb had performed consistently well throughout the tournament.

The draw set up two exciting games. Koppenberg, the World Cup fan favourite, went out in spectacular fashion to Mont Ventoux, ending all hopes of a tournament upset. Alpe d’Huez, in a closely fought tie, scraped through their semi final against Stelvio Pass, setting up an exciting all French affair in the Final. 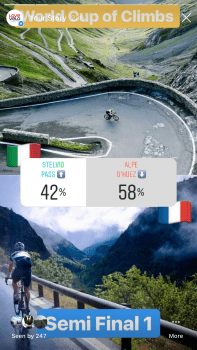 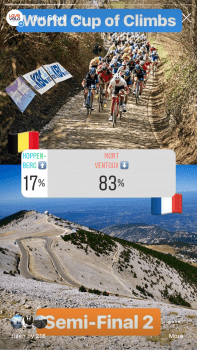 As two of Love Velo’s favourite cycling holiday destinations, we were both pleased and excited to see these two climbing powerhouses make the final. Both famous in their own right, both featured on the Tour multiple times and both incredible places to cycle.

If you’re yet to tackle the incredible Alpe d’Huez and want to see first hand why the area is so highly regarded, you can check out our Alpe d’Huez holiday here:

Or head further south and take on the World Cup of Climbs runner up, Mont Ventoux: 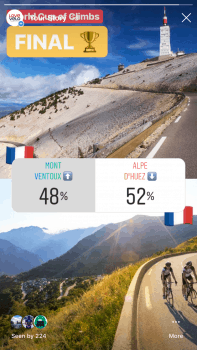 The tournament was a great success, even if Box Hill didn’t make it past the first round. I guess cycling won’t be joining football in coming home this summer…