Our Favourite Rides in Tenerife

Tenerife has long been the destination of choice for pro cyclists. It’s one of the few winter destinations where you could continually climb as Mount Teide tops out at 3,718-metres. The volcano is the highest point in Spain and ridden from sea level, cyclists can ride an almost 50km unbroken climb. Once you’re done with Teide, there is Masca Valley and the Mirador de Chefre which offer quite stunning vistas over the Atlantic. If you are looking for a day of a little less climbing, break your climbing at Vilaflor to taste a typical Canarian lunch before a descent back to sea level. Check out the best routes in Tenerife below.

If you’ve ridden up Teide, chances are you have ridden from the south. This is the most popular route up because the south west corner of Tenerife is home to some of the biggest concentration of hotels and resorts on the island. Whether you’re staying in Los Cristianos, Playa de Las Americas or even as far up as Adeje, the quickest route up Teide is from the south. Don’t let the popularity of the route dampen your spirits though as this is epic climbing with stunning backdrops once you have crossed underneath the TF-1.

Your ride will start by passing through Arona before heading on to the majestic roads leading to Vilaflor. You will ride through vineyards as the fertile slopes beneath Vilaflor which have an abundance of wineries. As you climb through Vilaflor, you will head into the forest.

Cycling higher still, the earth begins to turn jet black producing a kaleidoscope of colours from the almost luminous bright green plants which are set against the blue waters beneath you. 15km further on you will reach the edge of the crater before turning right and ending your climb by the cable car that can take you to the top of the volcano. This is certainly one of the best routes in Tenerife and you can read more about it here. 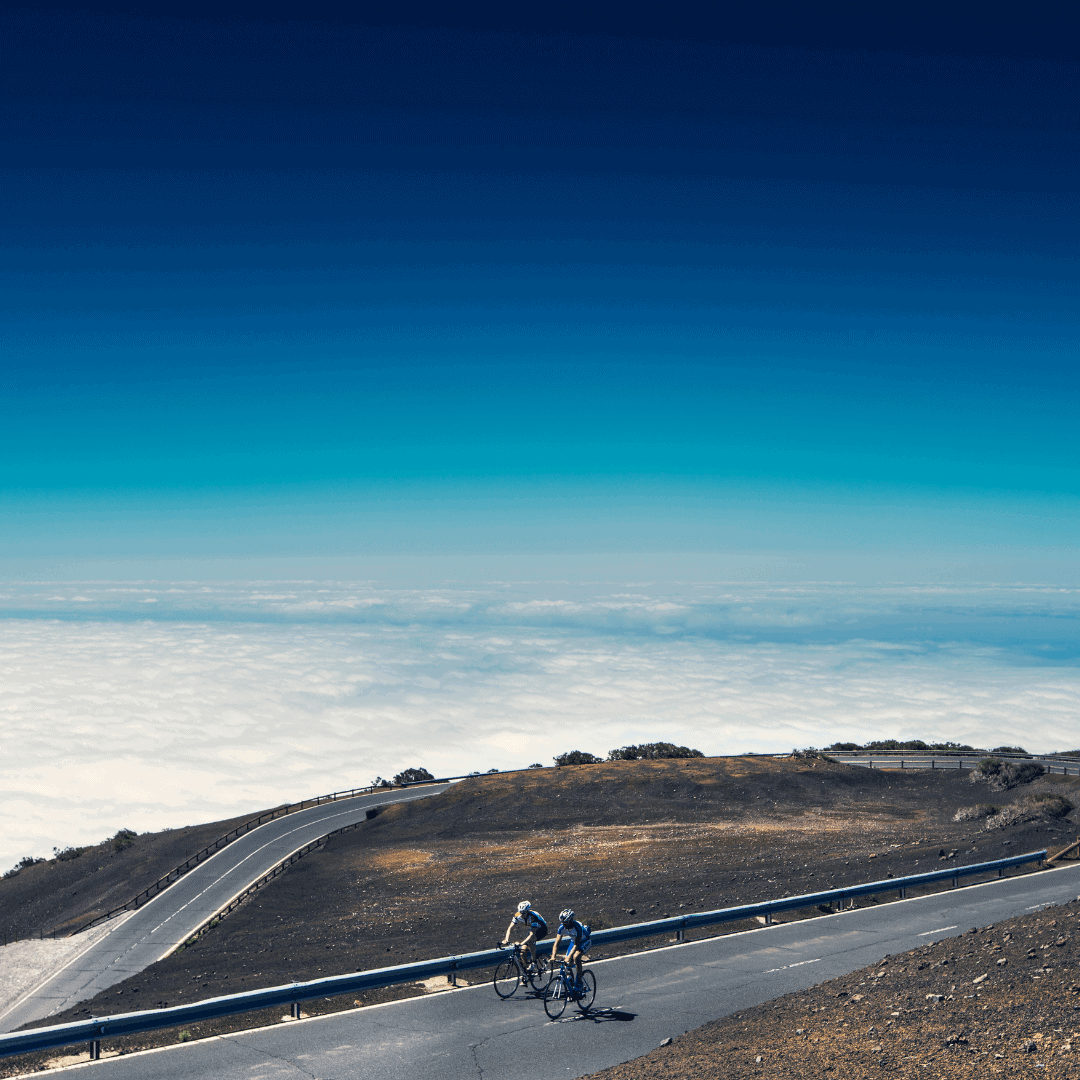 Is this this one the best routes in Tenerife? Well it’s certainly the most picturesque and arguably the easiest.

Heading out of Adeje, you need to cross the TF-1 again but once you have done that, you will be riding on quieter roads. Watch out for farm traffic as you will be cycling through banana plantations and farmland.

You will continue your climb and if the weather is mixed, you will notice the drop in temperature around Guia de Isora. The town has a different weather pattern than Adeje, despite it being under 20km away. You will climb higher, heading north and then back east as you enter the Teide National Park. From here, there aren’t many more stunning views from your bike than over La Gomera. The island has its own weather system, normally wetter than Tenerife and so La Gomera is often shrouded in cloud.

Unless you’re desperate to ride a particular time, stop at Mirador de los Poleos. The lookout offers incredible views of La Gomera behind you and the looming Mount Teide in front. You will ride higher into the national park before turning left towards the cable car. You can read more about the climb of Teide from the west, here. 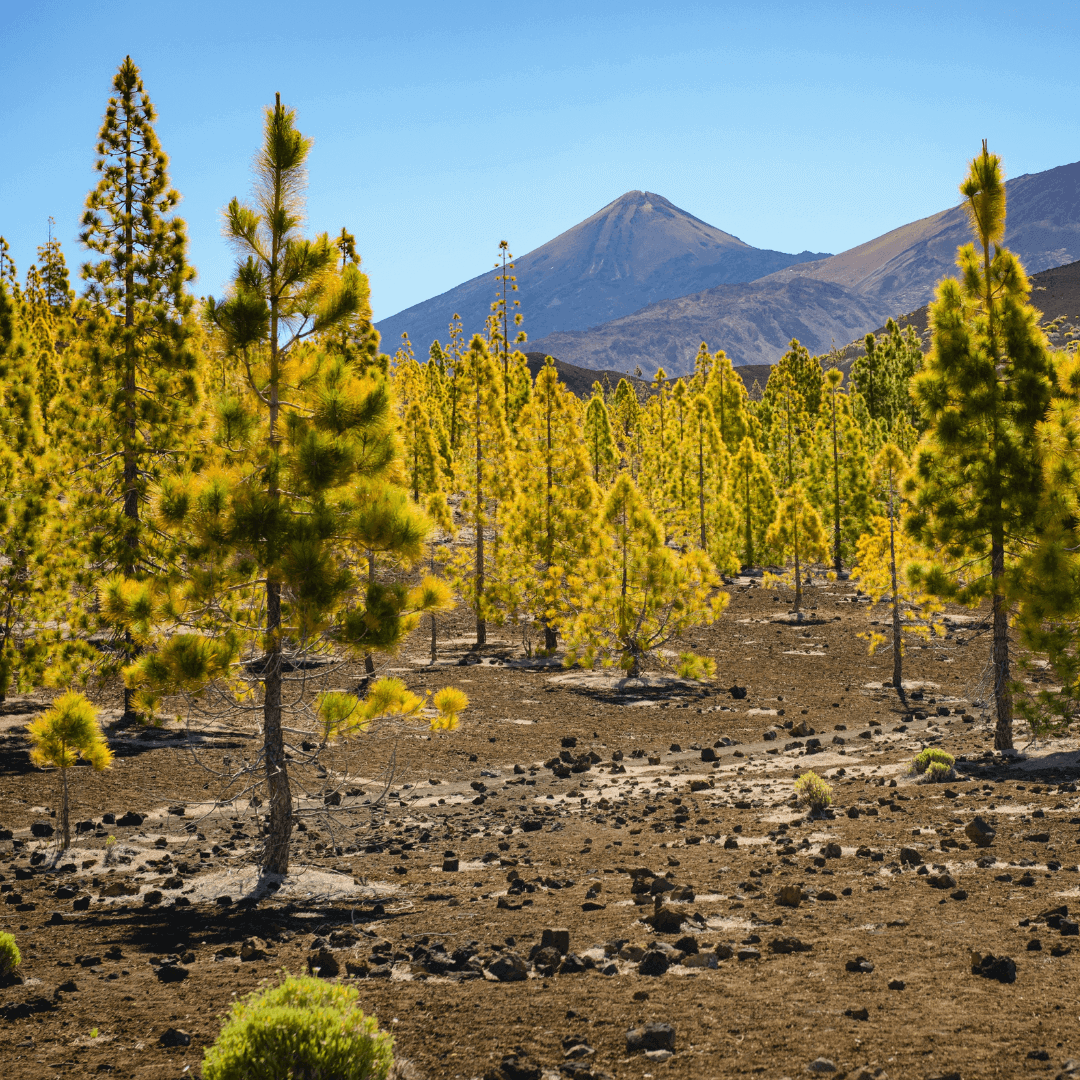 Masca is undoubtedly one of the best routes in Tenerife. It gives you a break from Teide but not from climbing. We recommend riding Masca from Playa La Arena. Riding it from Los Cristianos or Playa de las Americas just puts on more frankly ugly kilometres, so if you have hired a car, drive up to Playa La Arena or if you’re riding with us, we can help you with a transfer.

You will head north and its from Santiago del Teide where the riding really starts. You will climb short and very narrow sections of road as you make your way to the top of the Mirador de Cherfe. If you’ve ever searched for Masca Valley, it’s likely the view you would have looked at would have been the Mirador de Cherfe. The road dramatically drops below you, snaking through barren landscape with high walls all around you, eroded by the winds that blow through Masca. Masca offers a completely different view of Tenerife to Teide with the landscape looking more like Utah in the USA than anywhere in Europe.

Some incredible riding awaits as you cycle rapid descents until reaching Masca before some brutal punchy climbs and hair raising descents. Ride on to Buenavista del Norte and then experience the incredible ride down to Punta de Teno Lighthouse. The waters crash against the rocks beneath you as sharp, jagged rocks encase your surroundings. You have to have saved your legs as it’s a hell of a climb back round to Santiago del Teide before the sweet release of freewheeling back towards Playa La Arena.

You can read more about our loop ride through Masca, starting in Santiago del Teide, here. 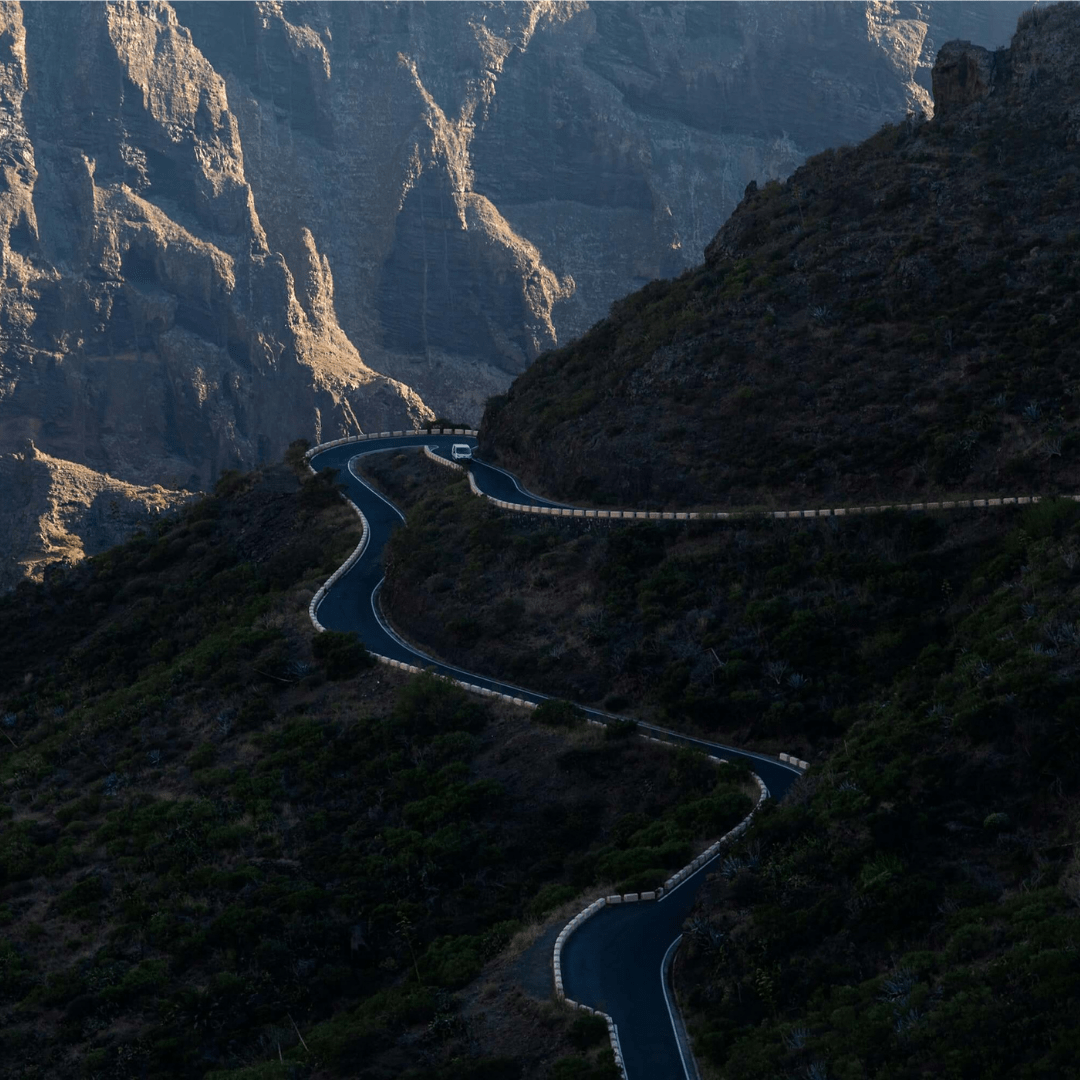 There are some days when you just want to enjoy some great cycling without pushing yourself to your limits. In Tenerife, our go to ride for that is the ride to Vilaflor. Vilaflor has a typical Canary charm, surrounded by pine forests with vineyards on the slopes below.

The ride starts from Los Cristianos with a steady incline up to La Camella. The road rolls for a few kilometres until you reach the village of Valle San Lorenzo, where we recommend stopping at the viewpoint of La Centinela. The lookout offers stunning views of the south of the island. You will pass through San Miguel until you arrive at Granadilla de Abona from where you will head north and climb. With 14 km of continuous ascent and an average slope of 6-7%, it is a steady climb all the way up to Vilaflor. Stop for a coffee or pastry in Vilaflor before a thrilling 20km descent back to Los Cristianos.

Vilaflor is well known amongst locals for offering superb local Canarian cuisine. Stop at El Rincon de Roberto for some traditional paella or if you fancy something a little lighter, head to Casa Pana. Even if you just fancy a coffee, Casa Pana is the place to be for its terrace which overlooks vineyards and provides a great view of Teide. 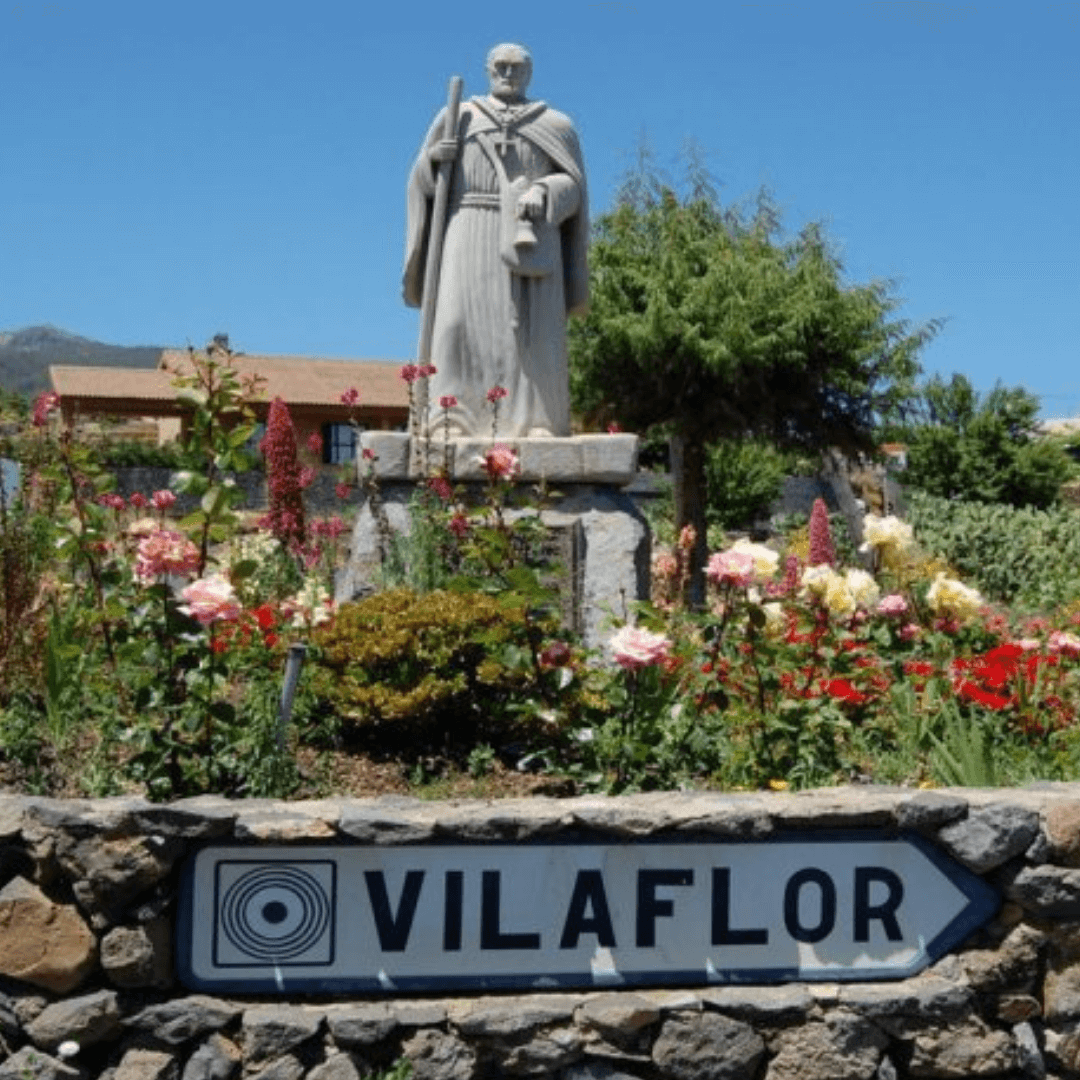 We like this ride as it provides some variation. Teide & Masca are virtually a single ascent and a single descent whereas this ride provides constant ascending and descending. The so-called “Carretera Vieja” or TF-28, connects the capital with the south and our route rides out to just before Guimar and back.

The ride from Los Cristianos undulates but gradually ascends to Arico. You will then ride through Fasnia and El Escobonal with the ride constantly undulating. From here, you will arrive at Mirador el Guimar, just before Guimar. You will then turn back towards the way you came riding the same road back to Los Cristianos. It’s important that you take plenty of supplies and water on this ride. The east coast is almost the forgotten coast with very few stops along the route. It’s dry and it’s only populated with very few towns so make sure you’re well prepared for your ride. 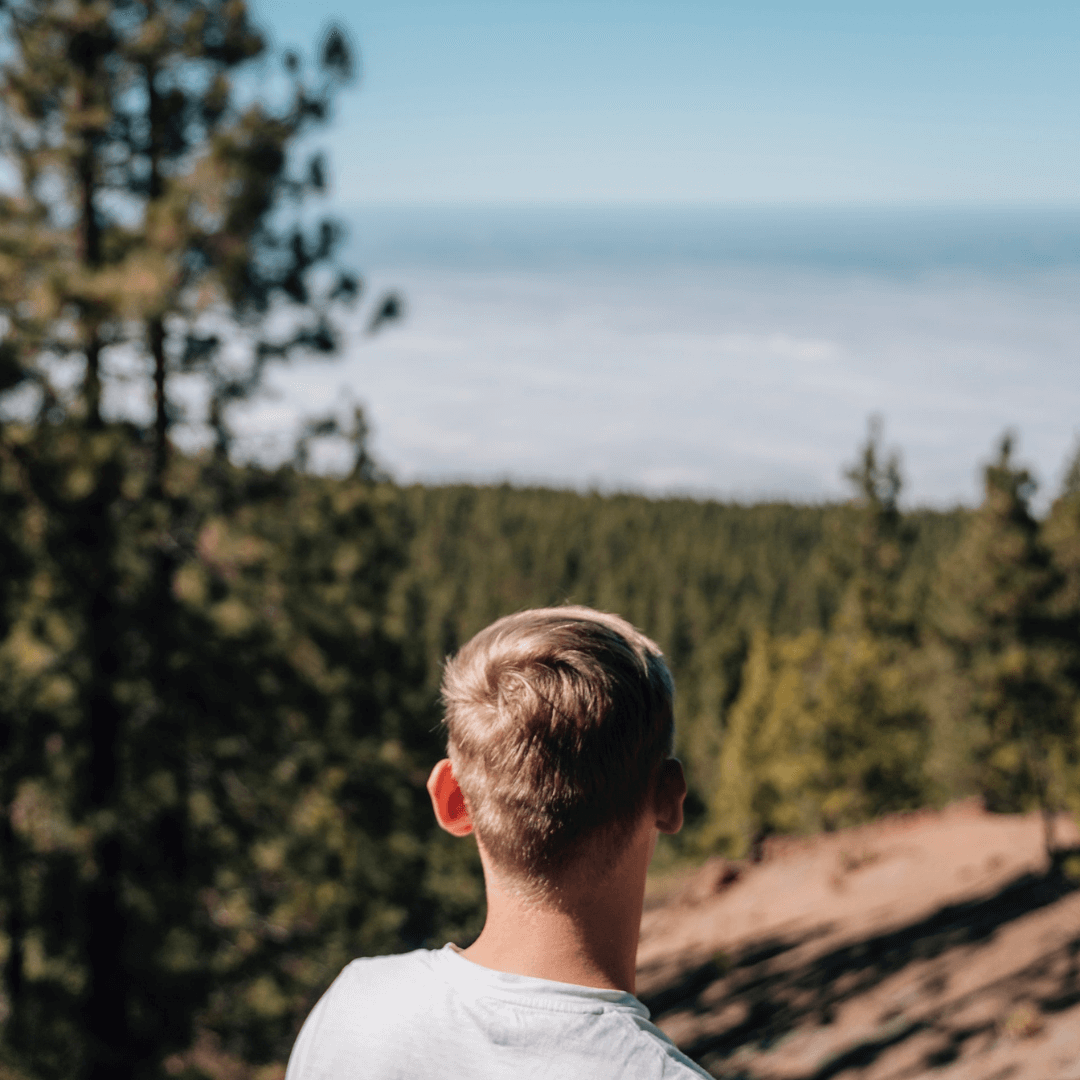