Lanzarote is often likened to a moonscape. Barren, rugged and rocky, the island is peppered with large tarmac roads spearing between valleys that are perfect for cycling. In contrast to Lanzarote’s Canary Island cousins such as Tenerife, there are less tall mountains. Yet less mountains doesn’t mean no climbing, and trust us, Lanzarote’s ascents are truly epic. Read on to discover 4 of the best cycling routes in Lanzarote to inspire your next cycling adventure…

Lanzarote’s less mountainous terrain means that the longest unbroken climb is 10km, at a height of 580m. We’re talking about Tabayesco, an essential cycling route in Lanzarote that you cannot miss. The climb begins as you take a left off the LZ-1 road onto the LZ-207. Immediately, the gradient kicks in (average of 5%) and you’re pedalling over the Tabayesco Valley. If you look back you’ll see the jagged coastline merging with whitewashed houses and the earthy hillside. Although keep your eyes on the road, as there will be switchbacks to the summit! 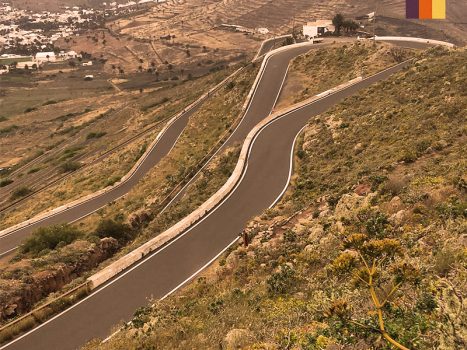 Make your way to Tabayesco from Puerto del Carmen, passing through Tias, Masdache and Teguise, which used to be the capital. En route, you’ll have the chance to roam through coastal villages, aloe vera fields and gardens filled with cacti. The LZ-30 road takes you there and back for the middle chunk, with an expansive valley peeling away either side.

Take a spin to the Mirador Del Rio, a viewpoint 440m high in the North West of Lanzarote. Here you’ll discover coastal scenery that is truly the best on the island. What used to be a pirate look out and fortress has been transformed into an architecturally artistic panoramic cafe. Once at the summit, spend time admiring epic views of the neighbouring Chinijo Archipelago. Even though the ascent to Mirador Del Rio is only 3km, you’ll be climbing from Haria. Yet it’s still fairly steady at an average gradient of 4.5% for 7km. 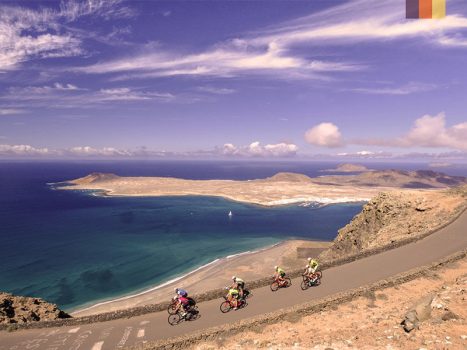 As well as from Haria, you can also climb to Mirador Del Rio from Orzola, which is a continuous 10km at 4.5%. However, we recommend the 103km route starting in Puerto del Carmen, then pedalling up to the summit via Teguise. The descent back home is also very picturesque, as you leisurely ride along the Eastern coast.

Although not a strenuous climb, the ascent from Yaiza to the Mountains of Fire is filled with rugged, barren beauty. The 6km of climbing is characterised by volcanic rubble lining the road, where intimidating peaks loom in the distance. You’ll cycle into Timanfaya National Park, the site of Lanzarote’s devastating volcanic eruptions in 1730 that continued for 6 years. Because the average gradient is only 3%, you may find it easier to admire the landscape than on other routes! 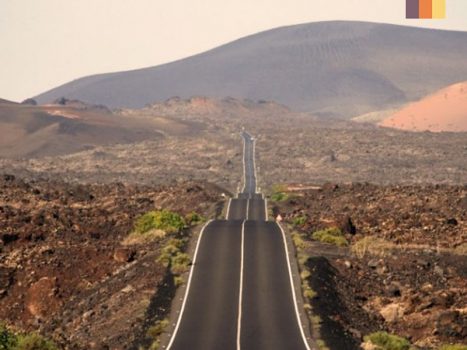 The central location of this route means that regardless of how far you want to cycle, Timanfaya is easily accessible. Cycle a short 50km loop from Puerto del Carmen through the Los Volcanes Natural Park after Timanfaya, then back through Tegoyo. To contrast, if you’d like a longer ride, consider cycling to La Santa after Timanfaya as well as Mozaga.

The ultimate challenge is The Lap. 180km long and 2700m of climbing zips you around the whole island. From Femes to Timanfaya, to Mirador El Rio, The Lap is a route that covers them all in one. What better place to test your training than Lanzarote’s incredible landscapes and pristine roads? 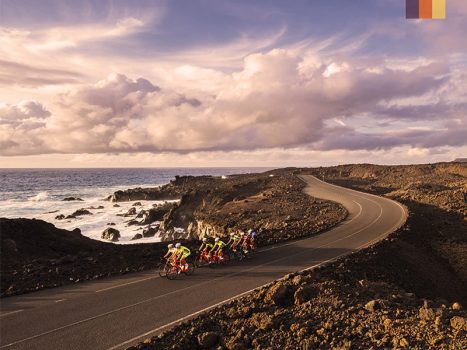 You can still start in Puerto del Carmen, however whether you do The Lap clockwise or anticlockwise is up to you! The difference in distance and ascent between the two is slight, so it depends which climbs you’d rather tackle as to which way you want to do.

Fancy hitting the saddle in Lanzarote? Give our cycling specialists a call, who can help tailor your cycling holiday to you. Use our handcrafted GPX routes, which include route descriptions and tips, or join guided rides.