Cycling on Mallorca: Loop of the Best Mallorca Cycling Climbs

Cycling on Mallorca simply doesn't get better than this. This Mallorca cycle route takes in some of the finest Mallorca cycling climbs, some of the most stunning views and is a challenge for nearly all cyclists. The ride takes in the Coll d'Orient, the Coll d'Honor, the Coll de Soller, Puig Major and if you are a glutton for punishment, there is the option of throwing in Sa Calobra whilst you're at it. You will ride 135km climbing 2,500m of Mallorcan roads on this epic road ride.

Port Pollensa to Campanet 22km and 275m of ascent

You will ride out of Port Pollensa towards the town of Pollensa before branching away from the mountains. Ordinarily this would be unremarkable as there are no real climbs but we just love this section of the ride. The roads are incredibly quiet from Pollensa as you head towards Campanet. The flatlands lay out in front of you and you will ride past orange groves and almond blossoms, with the odd traditional rural finca dotting the horizon. To your right, you will see the foothills of the Tramuntana. If you're riding this route, you will not want to stop so early but on another day, visit the Campanet caves. Over 10 million years old, these caves were completely undiscovered until 1945 when a farmer stumbled across them. Guided tours are now available and you can head deep underground into another world. 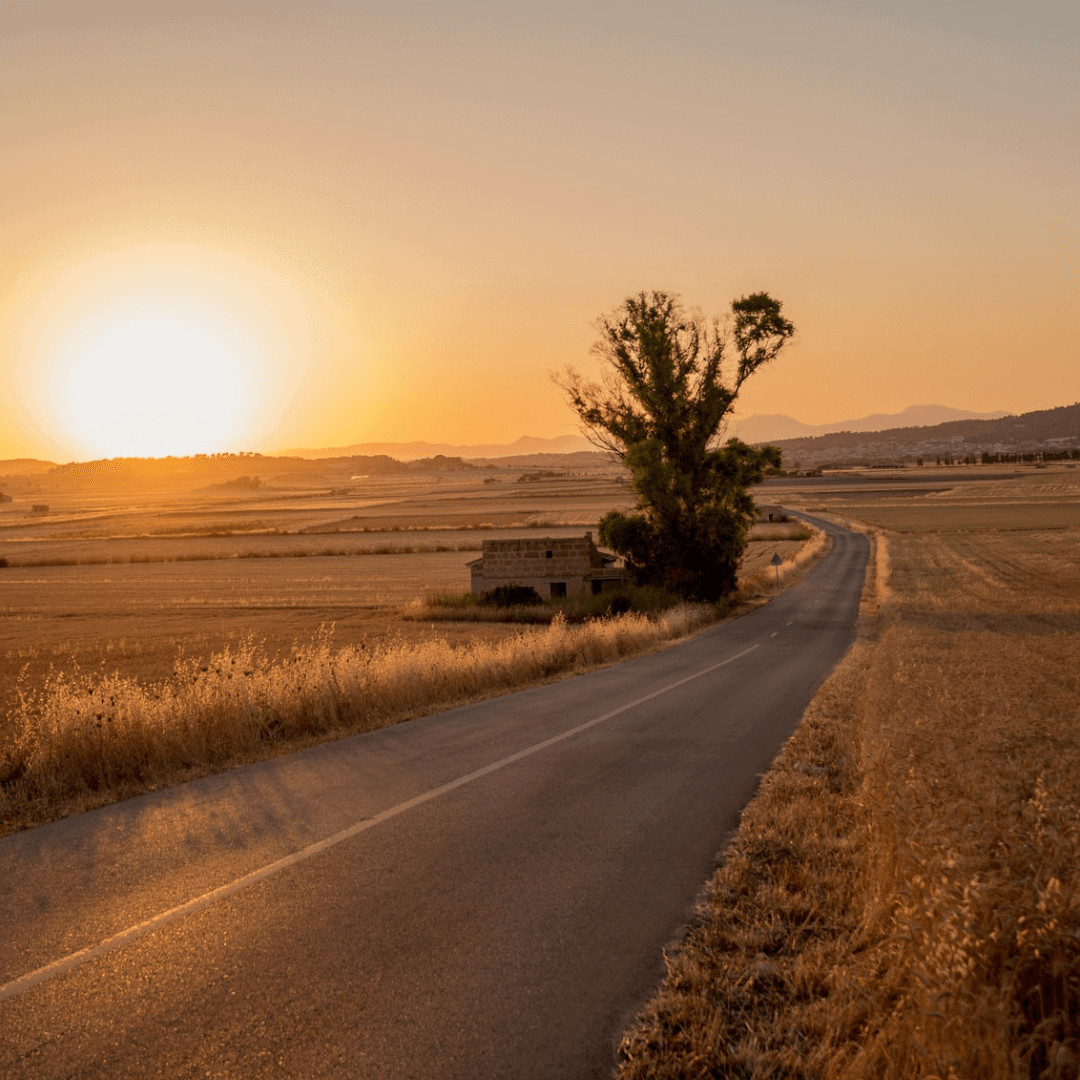 The road leading out of Campanet

Campanet to the Coll d'Orient summit 25km and 580m of ascent

The next section of this epic tour of Mallorca's most famous cycling climbs will take you to the Coll d'Orient. The coll itself is not too difficult as it's a relatively gentle 5km at approximately 5%. It takes you out of the Orient valley and up into the heart of the Tramuntana. The climb is almost dead straight until it bears west towards Orient for the last few kilometres. From here you will have a lovely descent into the town of Orient, a beautiful typically Mallorcan town.

The climb up to the Coll d'Honor is like a mini version of the climb to the Col du Soulor to the top of the Aubisque in the Pyrenees if you know it. You will have already done the hard work by climbing the Coll d'Orient. This climb is a really easy one at only about 4km and an average of 5%.

From the Coll d'Honor you will descend pretty rapidly to Bunyola. It's not technical at all and the road surface is in good condition. From here, you will head up north and begin your ascent of the Col de Soller. We love the Coll de Soller from the south. It's 5km in length and averages about 5%, so it's shorter and less steep than the northern side. If you want to read about what it's like to cycle the Coll de Soller, read our in depth review of the climb here. 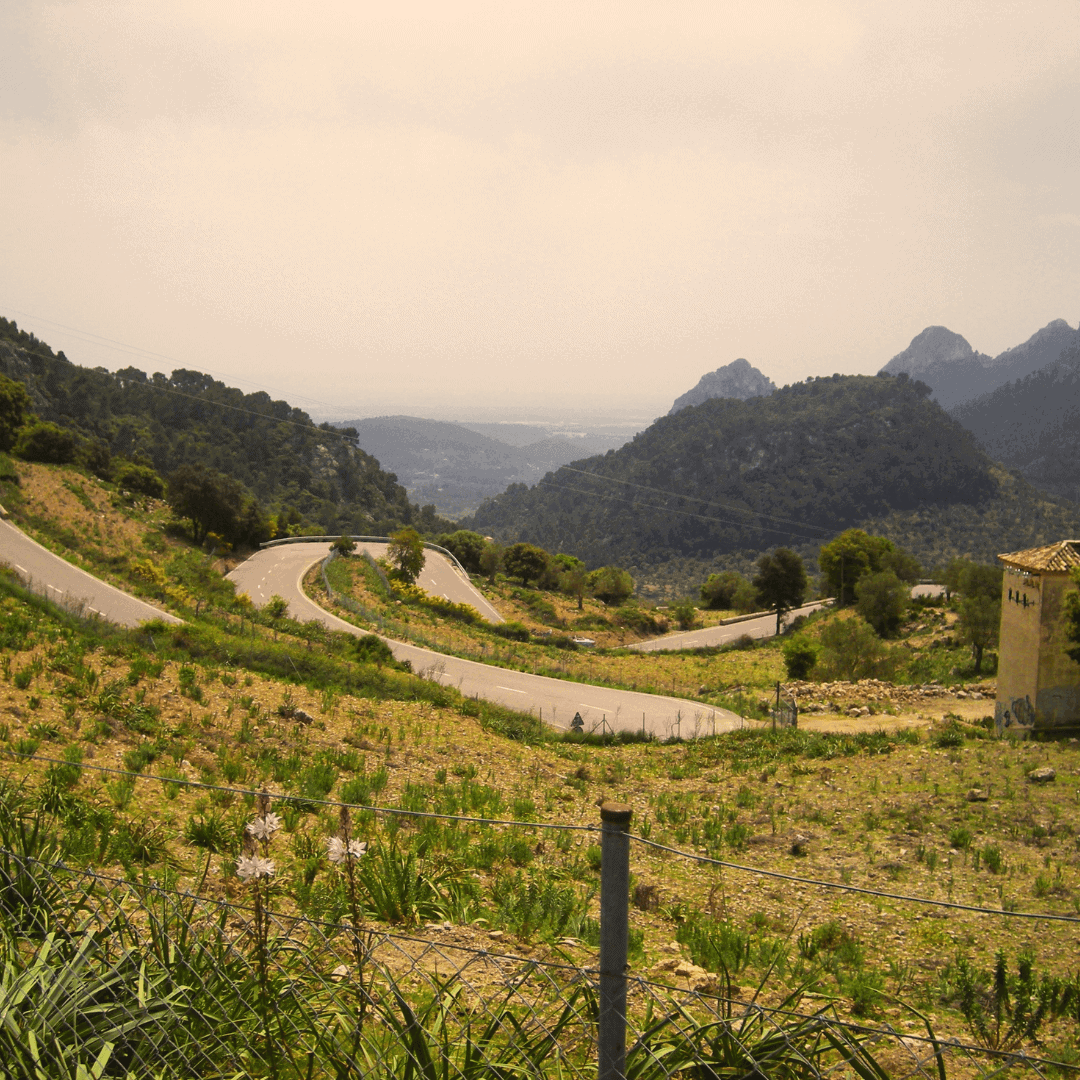 Coll de Soller summit to Puig Major and the Monnaber Tunnel 25km and 1,000m of ascent

This section of the loop is without doubt the toughest so we suggest that if you need, you grab a coffee or rest your legs in Soller at the bottom of the Coll de Soller descent. Soller has plenty of good restaurants and is a picture perfect town in Mallorca's mountains and so perfect for lunch or a quick coffee stop. It's also right on the route so it doesn't add any extra kilometres to your ride.

Climbing Puig Major is one of the highlights of any road cycling holiday in Mallorca. It's just shy of 15 kilometres in length with an average gradient of just over 6%. Cycling in Mallorca offers unrivalled views and Puig Major in particular provides some of the best. At the top of the climb, just before you reach the Monnaber tunnel, the lookout is absolutely breathtaking. The other side of the tunnel provides even more stunning views of Gorg Blau as you begin your descent. If you want a more in depth look at climbing Puig Major, click here. 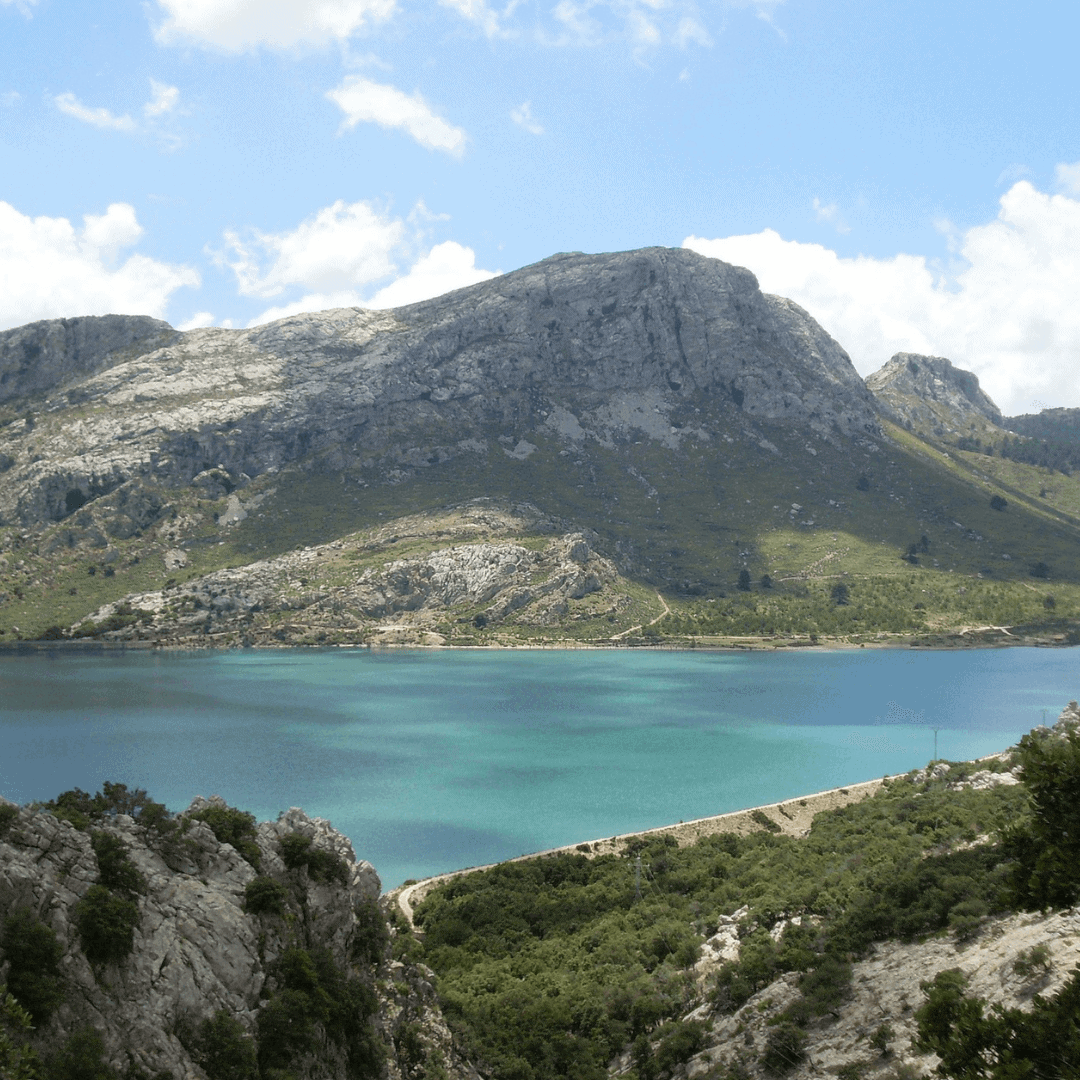 Gorg Blau, the lake you will see soon after the summit of Puig Major

As soon as you're through the Monnaber tunnel, you will begin an epic descent past the lakes before the ride kicks up just before the turning down to Sa Calobra. If you are feeling really strong, you can descend Sa Calobra and climb it again. Sa Calobra is 9.5km and is the most famous climb on the island for its stunning switchbacks and tough ascent. If you're going to add 20km and another 750m of vertical ascent to your ride, make sure you've read our guide to Sa Calobra so you know what you're in for.

From the top of the Sa Calobra climb, you will have a gentle climb before descending towards Lluc and its famous monastery.  The monastery has been a place of worship since the 13th century when a statue of the Virgin Mary kept reappearing in the cave. It's now a place frequented by religious Christians who come to pay their respects, as well as many tourists. Our route doesn't pass by the monastery so turn off the route at Lluc if you want to visit it.

Lluc to Port Pollensa 25km and 150m of descent

Your final 25km back to Port Pollensa will be relatively chilled with very little elevation. You will pass through Pollensa where the roads will become busier, before you arrive back at the port. Grab yourself a beer and reflect on the fact that you will have ridden one of Mallorca's best cycling routes and climbed nearly all of Mallorca's most famous climbs.

This Mallorca cycling route is long and tough. You are more than likely going to need to refuel along the way and fortunately the towns are conveniently spread out along the route.

At kilometre 22 you will pass by Campanet. Take a quick ride up to the Monnaber Hotel, the rural eco finca. Ask for Xisco and you will get a warm welcome and a great coffee.

Before the Coll d'Orient, you can ride off the route into Alaro. The turn off to Alaro is at about kilometre 40. Ride to the small Cycling Planet cafe for a coffee or use their track pump if you need.

You will pass through Bunyola kilometre 58. It's a very small town so refreshments are pretty basic, although there's a bike shop just out of town on your way up to the Coll de Soller.

Check out Ca'n Topa at the summit of the Coll de Soller at kilometre 67. The rural old finca has been converted into a cafe selling drinks, pastries and quick takeaway foods like pizza slices and sandwiches.

Sóller is at kilometer 75 and is the last town before Puig Major climb. This is a great place to stop as there are a huge number of options in town.

After you descend Puig Major, you can stop at the famous Cafe Escorca at the intersection with Sa Calobra. You can also ride to the Sa Calobra aqueduct and grab an orange juice at the OJ shack.

Hopefully you won't need a stop just a few kilometres out from Puerto Pollensa but if you do, there are a range of options in Pollensa town.

Top Tips for this Mallorca Route

Read our in depth guides of the major climbs including the Coll de Soller, Puig Major and Sa Calobra before you set off.

Take a gillet with you as the descents first thing are cold.

The Coll de Soller is busier on the north side. You will be descending that so make sure you ride with caution as there will be cars and other cyclists to watch out for.

The north side of the Coll de Soller gets less sunshine in the morning so can be damp. Again be really careful on your descent.

Take lights for the Monnaber tunnel. Remember too to take your sunglasses off as the sudden loss of light will disorientate you if you're not prepared.

Only ride Sa Calobra if you really do feel great. This route is really tough and adding Sa Calobra to it could mean you struggle if you're not prepared.