The best Murcia cycling routes are those that take you into the Sierra Espuna mountains. Surrounded by forest, you can climb tough passes with epic views over the plains. Our favourite Murcia cycling route takes on the Collado Bermejo, a climb that tops out at almost 1,200m.

Your climb today is a famous among the locals and the training ground for the likes of Alejandro Valverde who lives close by. It's a 21km climb at 4.8% which is tough for any rider. To put this in context, the mighty Col du Tourmalet is a couple of kilometres shorter and only a couple of percent steeper (although of course those extra percentage points make a big difference!). Similarly, Sa Calobra in Mallorca is only 9km at 7%. The Collado Bermejo is therefore a truly tough challenge for any rider. 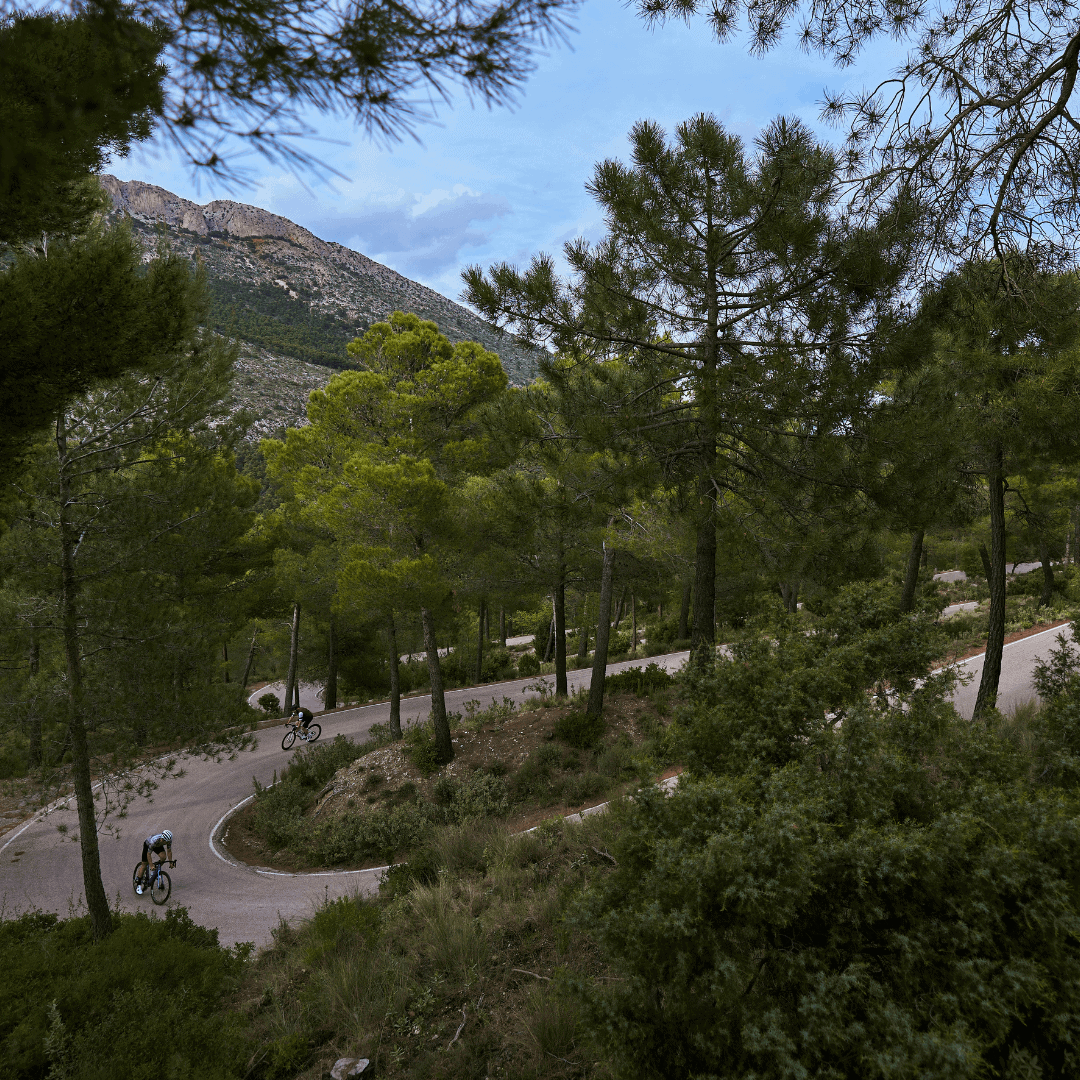 Climbing the road to the summit of the Collado Bermejo.

Our holidays allow you to ride the Collado Bermejo from either La Manga or Murcia which means the route is about 115 kilometres with close to 2,000m of climbing. We also have the option of a transfer out of the town and into the mountains which will reduce the distances but also allow you to spend more time climbing.

The first section of this route is pretty flat and uneventful. It's a 25km flat ride before a false flat for the next 10km almost all the way through to Alhama de Murcia, the town that sits on the outskirts of the Sierra Espuna mountains. The road though, once you pass Alcantarilla, is really beautiful. It is incredibly quiet with very little traffic. You will pass through vineyards, orchards and huge agricultural plains. Whilst it might not be tough cycling, it's a really enjoyable start to the day with plenty of time to get your legs spinning. If you prefer not to do this and to just get straight into the climbing, you can take a transfer from Murcia to Alhama de Murcia.

Unlike most Murcia cycling routes, this is a route punctuated by one major climb, rather than a series of smaller climbs. If you prefer shorter, punchier climbs, then check out this loop from Murcia taking in the Cabezo de la Plata.

The first few kilometres of the Collado Bermejo are really steady at 3-4% before it starts to ramp up by about kilometre 6. Here is the toughest part of the climb as the gradient reaches 7%. You can afford to attack it if you have the legs because the next 3 kilometres flattens out and even descends slightly, giving your legs a rest.

Make sure you recover in the flat section as the last 7 kilometres are really tough. They average out at 8% and the apex of some of the corners are up at about 10%. The last few kilometres are also the most beautiful part of the climb. The corners aren't Alps style switchbacks but the sweeping bends offer the most sensational views over the plains. Keep pushing and you will soon reach the Mirador Collado Bermejo, the lookout at the top of the climb. Take the views in as the peak of the climb give you amazing views to the west from one side of the road, and to the east from the other. 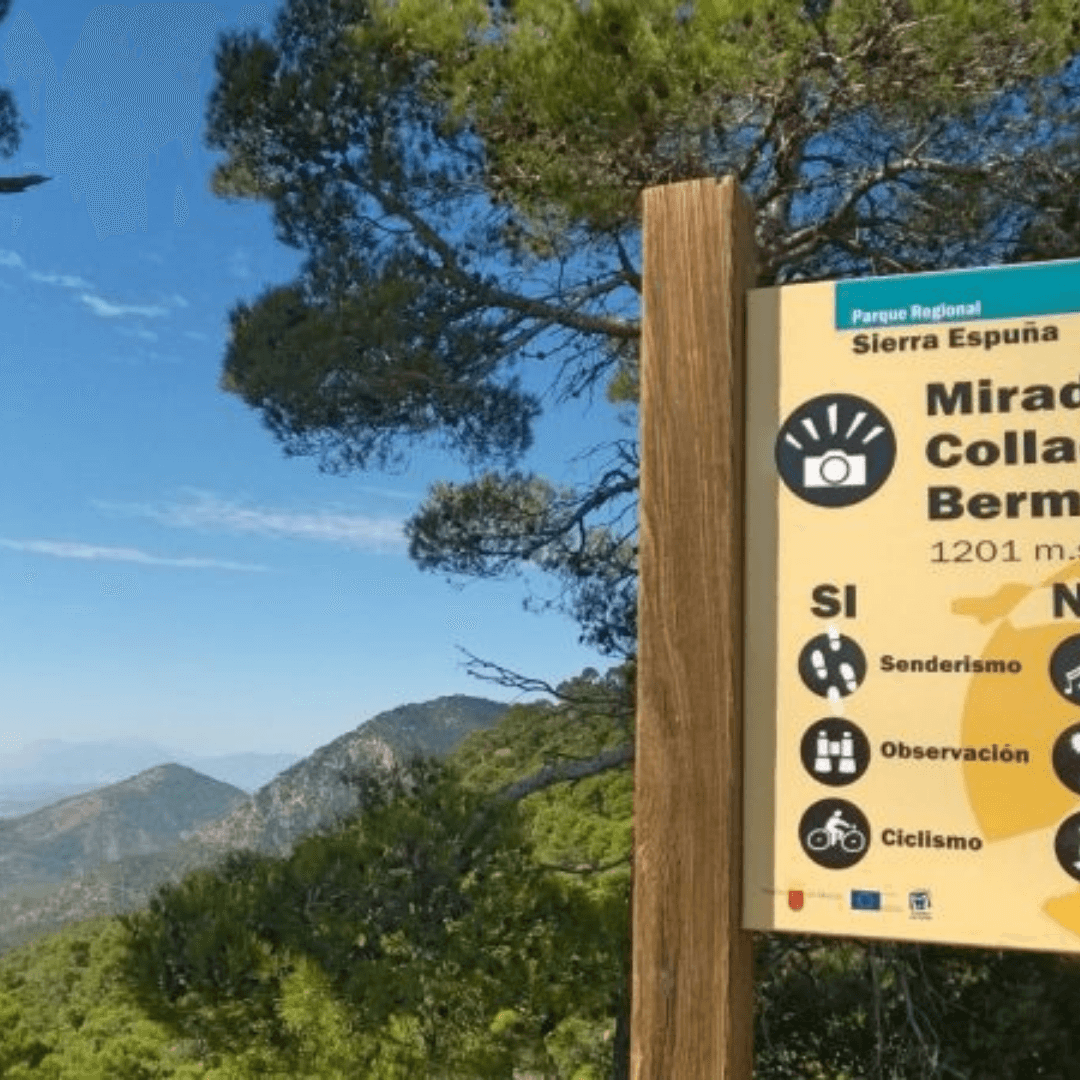 The viewpoint at the summit of the Collado Bermejo climb

Descent off the Collado Bermejo 58-83 km

Once you have summited the Collado Bermejo you will be in for a thrilling descent out of the Sierra Espuna. You will enjoy a really fast initial descent as the road is relatively straight until you hit a series of switchbacks which require a fairly technical descent. After about 9km, the road pitches up for a couple of kilometres but the gradients aren't too tough. Soon the road straightens out and other than another series of switchbacks just before you leave the forest, you will enjoy a fast descent all the way back out of the mountains. 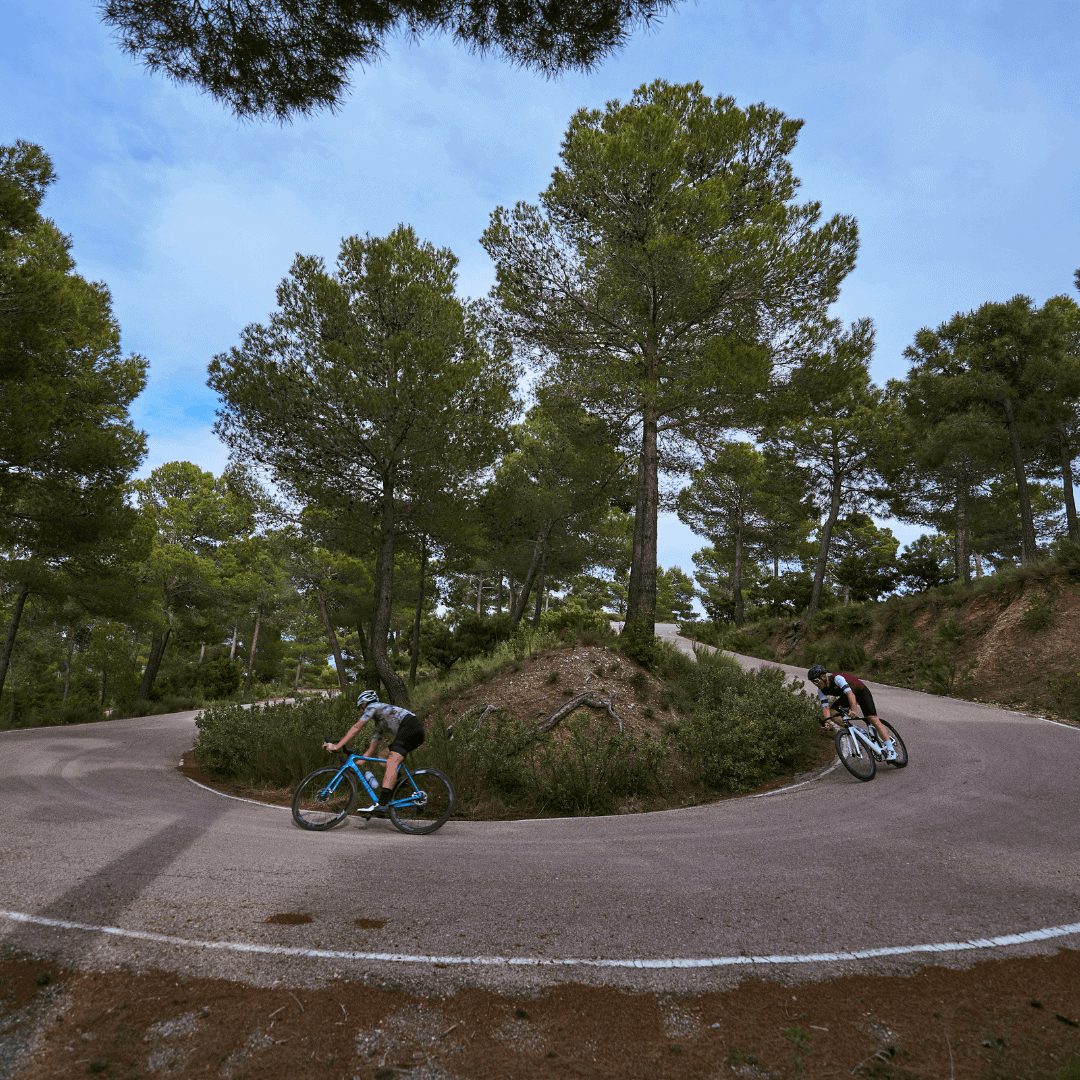 Descending off the Collado Bermejo in the Sierra Espuna mountains.

Once you are out of the mountains, you will continue to descend, all the way back to Murcia. The route takes you north of Alhama de Murcia before you are back on the road you rode on to start your ride. Enjoy riding an entirely flat or very shallow descent all the way back to town.

Top Tips for Cycling in Murcia

1. It's hot in the mountains

The best Murcia cycling routes take you into the mountains. Southern Spain is very hot for at least 8 months of the year, and especially in the summer. Even if you ride in early autumn or late Spring, temperatures rarely drop below the mid 20s so make sure you are prepared for the heat.

The Sierra Espuna is very remote and once you have ridden out of Murcia, you will be cycling into agricultural land. That means there are very few places to refuel and that becomes even more pronounced once you enter the mountains themselves. Once you pass Alhama de Murcia, there is nowhere to get water or food until you are back out of the mountains, which on this loop is 35km, climbing over 1,000m of vertical ascent. Be prepared and take plenty of water with you, and fill up in Alhama de Murcia.

We recommend riding early. This Murcia cycling route is lengthy and has some serious climbing so it's much better to get ride early rather than be summiting the climb in the middle of the day.

The weather in Murcia is hot. It reaches the mid 30s in the height of the summer, and it rarely falls below 30 degrees even in September. Riding in March or November offers great cycling weather. It's less humid and the temperatures are in the low twenties.

How to Cycle in Murcia

Ride the best Murcia cycling routes either from the coast or spend some time in the luxury resort of La Manga.

Use this GPX file to ride the Collado Bermejo in the Sierra Espuna.