Where to Go Road Cycling in Spain

As lockdown restrictions begin to ease at home, many of us are looking to our favourite European destinations opening up as they roll out their vaccine programme. With the news that Spain are beginning to lift restrictions, and with the expectation that they will have vaccinated 70% of their population by mid summer, there is great expectation of much needed autumn cycling travel to Spain.

For us Brits, that is music to our ears. Spanish roads are built for cyclists. Smooth tarmac roads wind into picturesque valleys dotted with quaint villages, and up mountains dominated by balcony roads. All that cycling is usually ridden under the Mediterranean sunshine and so it’s not hard to see why cyclists flock to Spain and its islands.  If you choose to enjoy a road cycling holiday in Spain, you can enjoy iconic climbs, quiet roads and routes ridden by the pros. We’ve brought together our favourite climbs in Spain as cycling abroad soon becomes less of a pipe dream and more of a reality.

Located 100km North of Barcelona near the Costa Brava coastline, Girona is a little pocket of truly epic cycling. Girona’s gorgeous Old Town is home to gothic cathedrals and a myriad of cobblestone streets, making it a perfect weekend getaway. Every corner you turn leads to a cosy cafe serving up fresh coffee and cake and it is estimated that over 100 pro cyclists live in and around the city centre, including David Millar. We’re not surprised considering the Girona Pyrenees are just on Girona’s doorstep, boasting incredible climbing…

Not so long ago, Rocacorba was only really known by radio mast engineers, and a bunch of hand gliders. There was no tarmac road, only a dirt track that led to the summit. Puigsou, the mountain where Rocacorba is situated, is hailed as an iconic cycling route nowadays. The name ‘Rocacorba’ is derived from a 12th century Santuari de Rocacorba located on a nearby hill to the Puigsou summit. Starting at a stone bridge at the bottom of Puigsou, the Rocacorba climb extends 10.1km upwards and has been made famous by David Millar. As a result of the average gradient hitting 6.5%, many, especially pros, utilise Rocacorba as a tough time trial. There’s only one way up so enjoy the descent once you’ve climbed to the top. 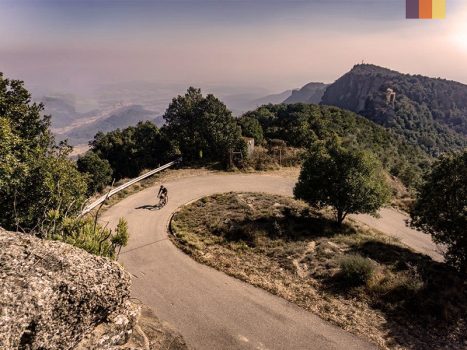 Els Angels is not a long or particular tough climb but one that is not to be missed if you’re in Girona. Beautiful forests adorn the road, with views out to the rolling hills of Catalonia. Els Angels ascends for 11km at an average gradient of 3.8% before you reach the monastery on the top of the climb. Have a wander inside if you can as it has its own history. Salvador Dali was married at the Santuari dels Angels Chapel. 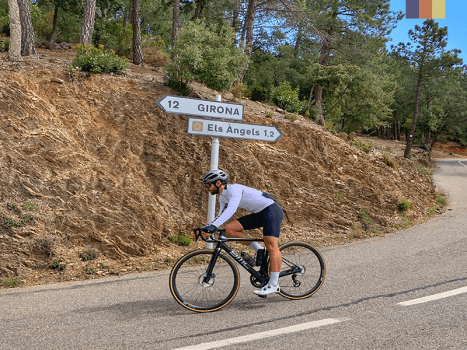 A little on the lowkey side, Sierra Nevada’s cycling routes are a refreshing challenge. Quiet roads are the selling point here, with a sparkling coastline to the east, and epic climbs to the west. Sierra Nevada’s landscape is breathtaking, and the weather makes riding possible almost all year round. There are however a couple of climbs that are subject to snow and surprisingly there is a climb in the Sierra Nevada which is the highest paved road in Europe. Pico Veleta, stands tall at 3,400m, that’s 700m taller than the famed Stelvio in the Italian Alps. With snow walls and white peaks, this is cycling in Spain that you would never had though existed. 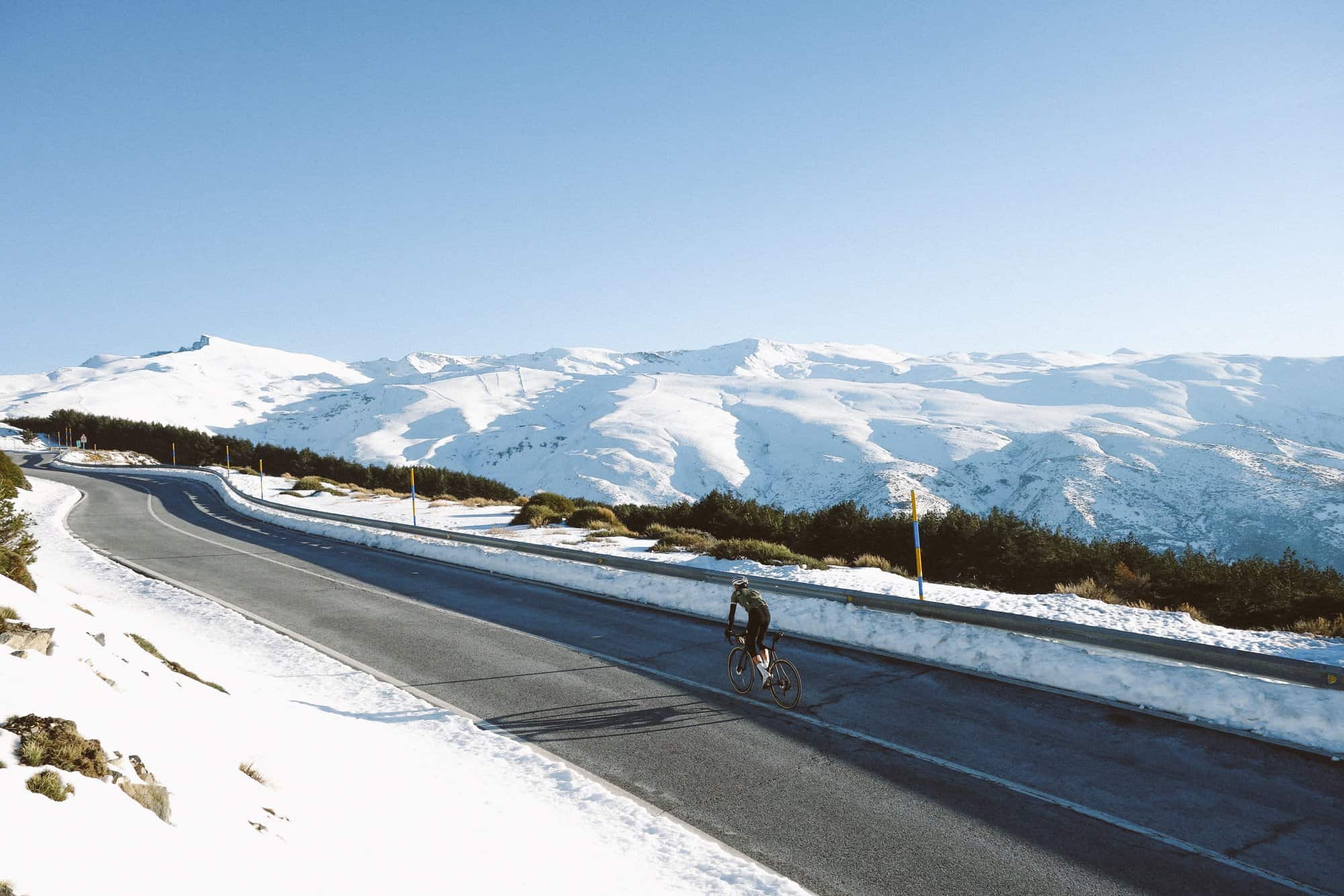 Road of the Goat

One of the most beloved climbs of the Sierra Nevada is the Road of the Goat. Cycling this route takes you on the same road merchants used to haul mules carrying fresh fish to Granada. Whilst the merchants took a couple days to trek up, a cyclist can now tackle it in under a few hours. Stretching out between craggy cliff faces and the rugged drop off the balcony stone wall below, the Road of the Goat is 37km. In addition, switchback lovers will be at home in the final section, which features some pretty epic tight bends. Even better, you’ll have the thrill of descending these twists and turns all the way back down to Almuneca. 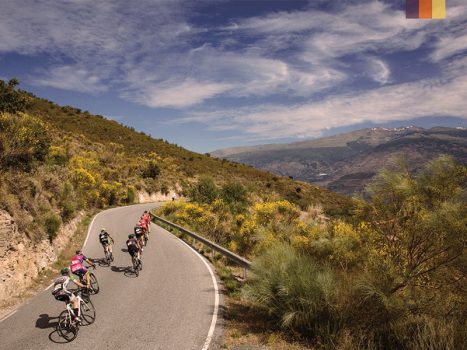 If you love switchbacks ride from Órgiva up to Canar. Even though it’s shorter than Road of the Goat at 8.3km, the gradient often kicks up to a whopping 15%. In total, you’ll ascend 1015m from Órgiva, with absolutely gorgeous views back down the valley at the summit. The scenery is stunning with the bright blue Rules Reservoir peeking between the trees. In particular, when you reach the town of Canar, consider stretching the legs and exploring. The town has a rich history, most notably the arrival of Arabs in the 8th century. Even though the Catholic monarch expelled the Muslim Arabs in 1609, Arabic culture is infused into the architecture. 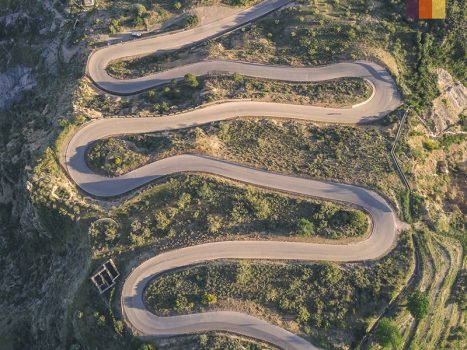 Practically a playground for passionate road cyclists, the Costa Blanca coastline combines both flat and steep. Grab some speed riding along the coast, where hills are unlikely to be higher than 200m. Then, head inland where you can feel the burn tackling big climbs. Much like Sierra Nevada, cycling in Costa Blanca offers a dreamy paradise that is quiet and picturesque. However, don’t be surprised if you stumble across a peloton of pro team cyclists, such as Sunweb, Ineos and NTT. Close to Benidorm and Alicante Airport, Calpe is the perfect place to base yourself when cycling in Costa Blanca.

Coll de Rates is a classic climb, even if it is less well known than the Rocacorba or Sa Calobra in Mallorca. It’s certainly not one you’d want to miss when road cycling in Spain. Although not particularly long, or steep, it’s a great ride with gorgeous scenery. Look one way and you’ve got the light blue sea lapping at the shore, and look the other to the jagged Bernia y Ferrer mountain range. The Coll de Rates is only 6.5km and averages at a steady 5% gradient but don’t miss the summit when you think you’re at the summit. Head on for another 300m up the asphalt path at the cafe. 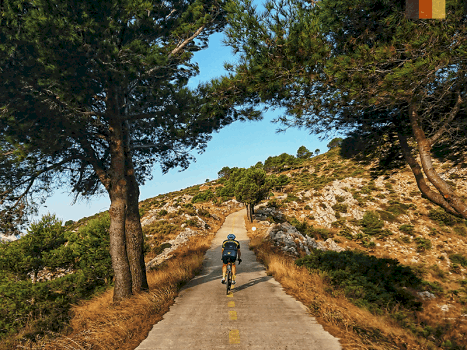 If you want to cycle in Spain guess, give our cycling specialists a call, and they’ll help you decide, and arrange your flexible cycling holiday tailored to your needs.