Where to go Cycling in Holland

Intricately woven into Holland’s lifestyle is a 32,000km network of traffic free cycle paths. Unlike many countries, cyclists can ride their bikes without worrying for their safety in cities, the countryside and national parks. Cycling in Holland is more popular than driving, making it a kingdom ruled by those on two wheels.

However, the Dutch had to fight for their right to cycle safely on their streets when vehicles began a rapid appearance in the 1950’s. Sparked by a rise in traffic fatalities and loss of playing space, children in Amsterdam rose to the challenge of creating traffic-free areas. After years of activism, which grew to involve politics quickly, Holland’s biking revolution changed urban planning to create the bike dominated transport culture the UK can only dream of.

Perfect for families, new cyclists or experienced cyclists wanting to try something different, you’ll be spoilt with the abundance of routes cycling in Holland. So, where should you go?

Amsterdam is the capital city of Holland, and its rich history is on display in the wealth of museums dotted about, all of which are accessible by bike. Immerse yourself in the lives of Anne Frank and Van Gogh, Dutch culture in the middle ages at the Rijksmuseum and all things Amsterdam at the Amsterdam museum. Cycling to Haarlem offers a more tranquil setting than Amsterdam, yet the historical city is also built up with picturesque canals and cobbled streets. Haarlem is sat close to the famous tulip fields, and throughout your cycle south to Leiden, pockets of vibrant, colourful flowers will never be too far away. Delft and Gouda should be on your list of destinations too, as they feature some of the most interesting Dutch landmarks and traditions, including windmills, pottery and cheese. 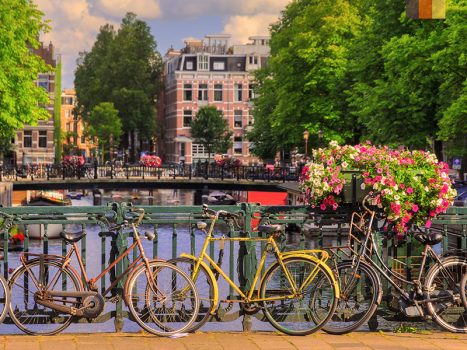 Throughout your cycling journey in the heart of Holland, windmills will become a common sighting. Although very pretty, the 1000 Dutch windmills scattered across the country have a useful purpose – to pump water from the lowlands to rivers in order for land to be farmed. You’ll have the opportunity to discover some still in use on your way from Gorinchem to Gouda. It’s recommended that you start and finish in Utrecht, Holland’s 4th largest city, where the 2015 Tour de France held the Stage 1 time trial. As you head back to Utrecht from Gouda feel relaxed in Woerden’s beautiful nature, which is home to Storks living amongst woods, rivers and lakes. 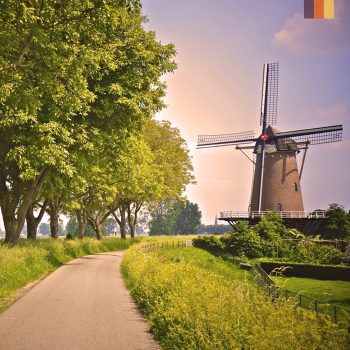 From Burgh Haamstede to Brielle, the coastal cycle path meanders past smooth golden sand dunes and the well known Delta Works. Because of the low lying land of Holland, sea barriers such as dams and dikes were constructed to prevent flooding from the sea. From above, Brielle looks like a star. The unique star shape was originally designed in 1713 as a fortification using canals and high walls. Cycling onwards will take you through islands filled with Dutch culture. Hoeksche Waard is en route to Willemstad and looks like a picture book painted with fields and orchards. In contrast, the Isle of Schouwen features a harbour and medieval town, Zierikzee. 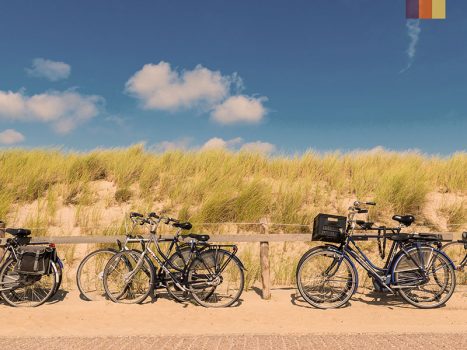 Gentle routes with short distances between locations and lots to see and do for the kids makes the Eastern coast of Holland perfect for cycling families. Fun museums such as the Escher Museum of Optical Illusions and the Space Expo, as well as beaches and tulips fields to explore equals no boredom! Everywhere you’ll cycle, from the Hague, to Zoetermeer to Noordwijk aan Zee will provide great opportunities for spending quality time with your family. The icing on the cake is of course how safe your children will be, due to the dedicated traffic free cycle paths. 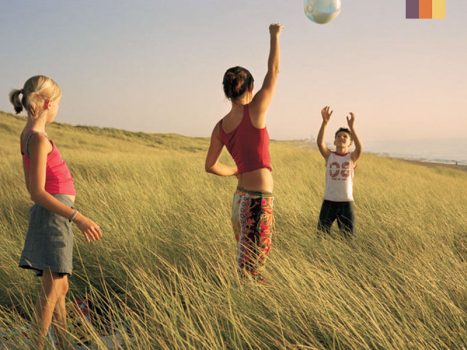 Cycle through the alternative North, across land that until recently was the sea, and a part of the Holland that doesn’t speak Dutch. Being the largest artificial island in the world, Flevopolder will offer an insight into just how low lying Holland is as you make your way to Enkhuizen. When in Enkhuizen you’ll need to take a ferry to Oudemirdum. Enter the province of Friesland, which almost feels like a separate country, as people there speak Friesan and have a slightly different culture. Ensure not to forget to taste the Fryske Dumkes, their traditional hazelnut biscuits! Explore Friesland’s UNESCO heritage site, Wounda, en route to Wieden National Park in Zwartsluis along with the dikes in the impressive town of Kampen near Harderwijk. 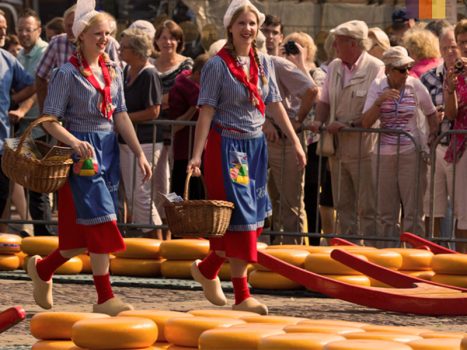 When is the best time to go cycling in Holland?

Holland’s climate is fairly mild in all seasons, allowing you to cycle there anytime and still have an enjoyable holiday. After all, the Dutch cycle no matter what the weather is! If you want to see the tulips, the season to go is Spring, from March to May, with mid-April offering the best chance of full bloom. Summer tends to be warm with temperatures, on average, in the 20’s. Winter borders freezing and there’s a little more rain, however the cycle paths and museums don’t close.

Tips for cycling in Holland.

You may notice that the Dutch aren’t big on wearing helmets. It isn’t compulsory in Holland, but of course, as we’re taught in the UK a helmet can prevent life-changing injuries if an accident were to occur. We recommend that you wear a helmet when on your bike.

Holding an electronic device such as a phone, or a GPS, is not allowed in Holland. Similarly to holding a phone when driving, it can be distracting and potentially end in a sticky situation such as crashing into another cyclist or pedestrian.

Bike theft is common in Holland, therefore it’s a good idea to have a certified lock that you can use whenever you leave your bike unattended.

Holland’s cycle path network is extremely easy to use. Each route is numbered with signs so you can plan ahead to where you want to cycle. There are either junctions, which are short routes, or LF routes, which are longer. If the sign has a white background and red letters it shows the shortest distance to a place. Generally though the distance and routes take you through the most scenic areas that tend to be longer.

To experience cycling in Holland for yourself, contact our team of cycling specialists who can help you organise a fully flexible cycling holiday and choose the routes that suit you best.