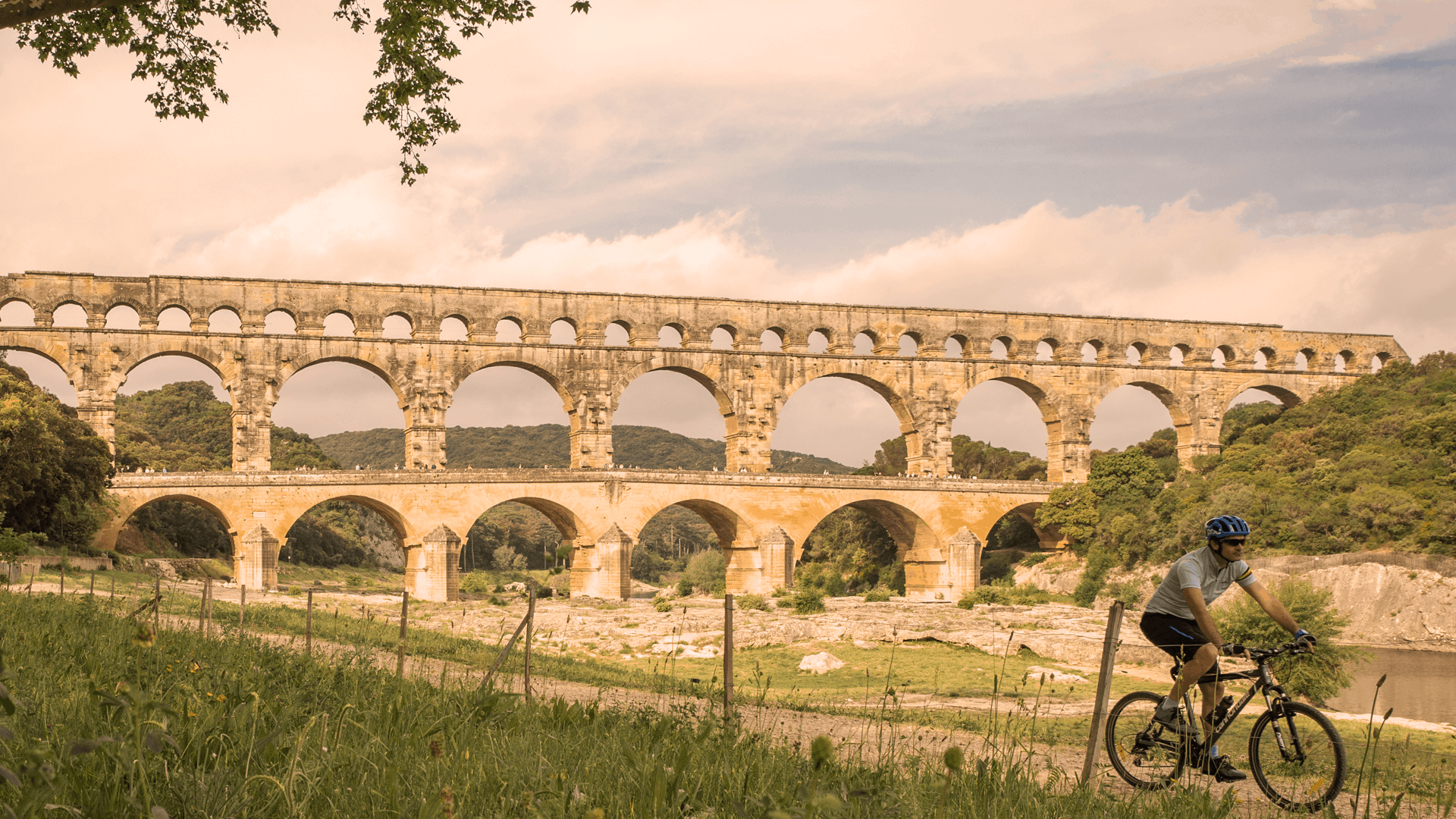 Guided Cycling Holiday in Provence
7 nights from £1265.00
20% OffMake an Enquiry
WE LOVEFamous French Wine
After being tempted by the vineyards en route, take part in a free wine tasting in Chateauneuf du Pape to sample France's best local wines.
WE LOVERoman History and Vincent van Gogh
Learn about Roman history in Arles and Orange, then visit Saint Remy, where Vincent van Gogh painted his masterpieces.

AccommodationThe hotels you will be staying in will be comfortable and full of character and authenticity.

MealsYour trip will be on a bed and breakfast basis so you will enjoy a hearty breakfast before each day's ride.

GuidingYour trip leader will act as a guide, leading you on all the spectacular routes from Avignon to Arles. You will be able to ask many questions to your guide in the towns and villages you stop in, especially on the walks, as they know the areas well!

Group RidesBecause you are riding in a group of no more than 15, you will have the chance to meet like minded people. When on your rides, nobody will get left behind so you can cycle at your own pace.

Great Bike HireYou will be provided with top quality bikes for this trip, that are all maintained extremely well. Make sure to let us know of your height so we can pick the right bike for you. We can also provide E-bikes subject to availability. Please note that wearing helmets is compulsory and you must bring your own.

Arrive into Avignon, the City of Popes and spend some time enjoying this historic city, before joining the group at the hotel in the evening.

You will cycle away from Avignon on your way to Orange. You’ll have the chance to stop in Chateauneuf du Pape’s famed vineyards and have the option to taste sips of their local wines. Your ride will undulate as you head out towards Orange where the ride ends for the day. our guide will lead a walk through the beautiful city and you will visit the Arc de Triomphe d’Orange and the well preserved Roman Theatre.

Today your ride will begin by crossing the mighty Rhone river, before passing medieval villages such as Saint-Laurent-des-Arbres, and picturesque vineyards producing the historic kings’ favourite wines. Next up is the iconic Pont du Gard, built in the first century AD and one of the finest preserved Roman aqueducts. If it’s a quiet day, you may even have the opportunity to ride across it. End the day in Uzes, the tucked away town full of cafes, boutiques and markets.

Although a long day in the saddle, you will stop in Tarascon to wander around the medieval castle and listen to the legend of the beast of Tarascon that gave the town its name. Carry on cycling after lunch toward Saint Remy, a typically Provencal village with charming character. Take a look around the Saint-Paul Asylum, where Vincent van Gogh painted many of his masterpieces, such as, ‘The Starry Night’ as a self-admitted patient.

A day off the saddle allows you to rest your legs and explore Saint Remy. People watch and read a book at one of the many cafes, wander around the weekly market held every Wednesday or get lost in the side streets. If you want to ride today, talk to your guide about an additional, independent ride around the local area.

First up today conquers the most difficult climb of your trip, which is 10km in length. The effort is worth it, as it will take you through the vineyards to one of the most beautiful villages in France’, called Les Baux. After visiting Les Baux, you will ride alongside white limestone rock into the Val d’Enfer, then follow the Canal d’Arles to Arles. Your guide will take you on an orientation of Arles to visit the UNESCO Roman Amphitheatre, Place de la Republique and Van Gogh’s Cafe Terrace.

Loop down to the Mediterranean Sea in the capital of the Camargue, Saint-Maries-de-la-Mer, a nice contrast to the patchwork of vineyards inland. The city is set on the Rhone River delta, home to more than 400 species of bird and the famous Camarguais horse, often seen running wild. Your ride to Saint-Maries-de-la-Mer is one way, so after a relaxing lunch you will be transferred by vehicle back to Arles. However, there is an option ride independently back to Arles if you’re feeling fit.

Say your farewells to your fellow cyclists and depart from Arles in your own time. If you would like to extend your trip, just let us know.

What to ExpectFrom Beautiful Landscapes to Roman Architecture

Ride into traditional French culture and history on your route from Avignon to Arles, with stops at famous towns, villages and landmarks along the way. Understand why the French are known for their wine at a tasting in a local vineyard and delve deeper into how the Roman’s influenced French architecture at the Pont du Gard. Visit the birthplace of some of Vincent van Gogh’s masterpieces at the Saint Remy Asylum, buried in Provence’s inspiring landscapes. 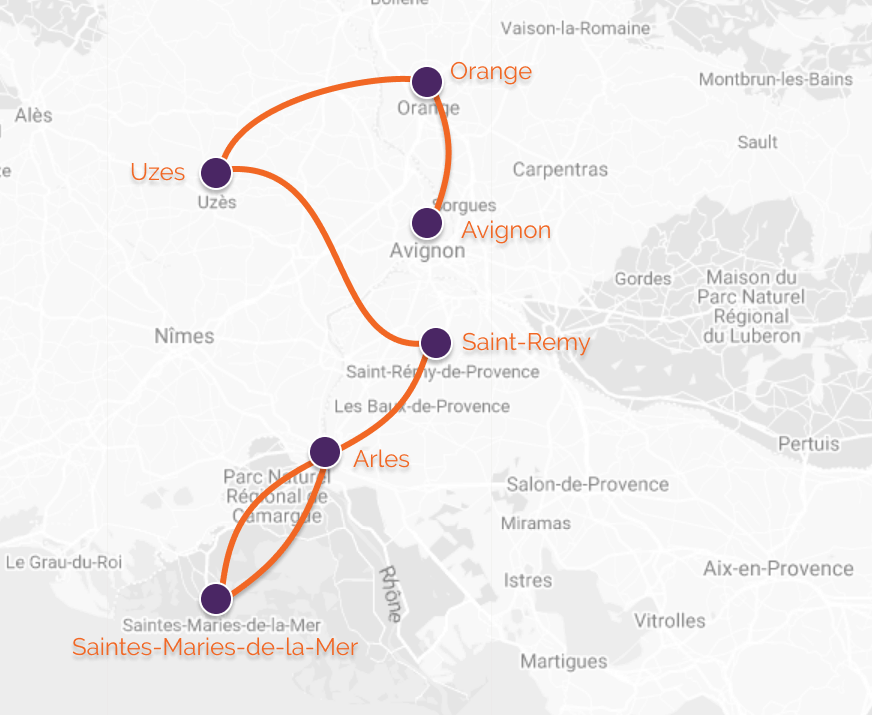 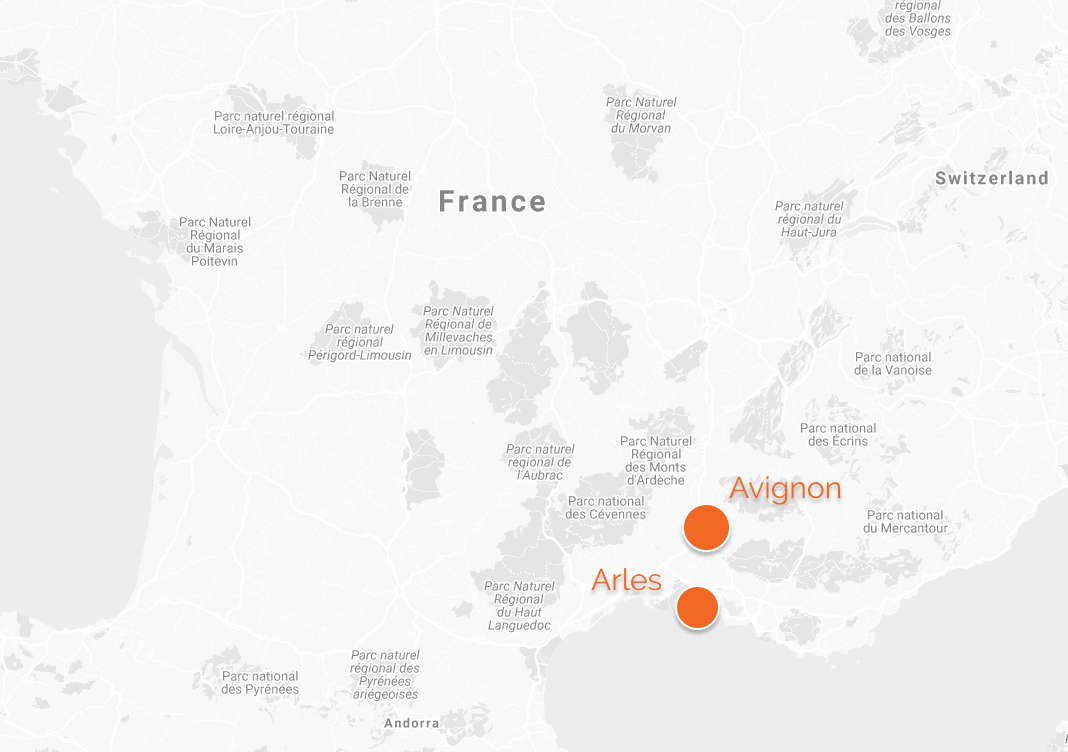 How's the Weather? in Provence

The SpringMarch to May
Spring is a magical time to visit as vibrant colours appear on the hillsides and the weather begins to warm up after a cold winter. As you move into the later months of Spring, particularly May, the weather is warm without being too hot and the summer crowds have yet to arrive.
The Summer June to August
The summer in Provence is usually very hot with little rainfall. It's best to cycle in the mornings before the midday sunshine.
The Autumn September to November
The Autumn, similar to the Spring, is a beautiful time to cycle in Provence. The warm summer sun lingers on and the crowds begin to disperse once again with winter incoming.
The WinterDecember to February
Provence is best avoided in the winter as it's often very cold. 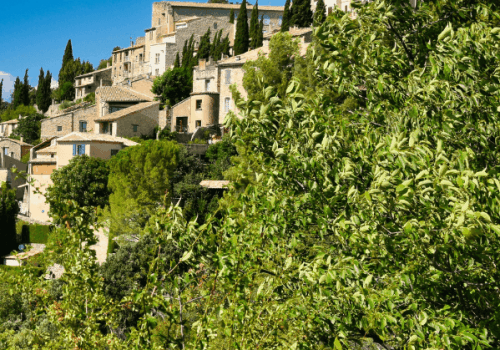 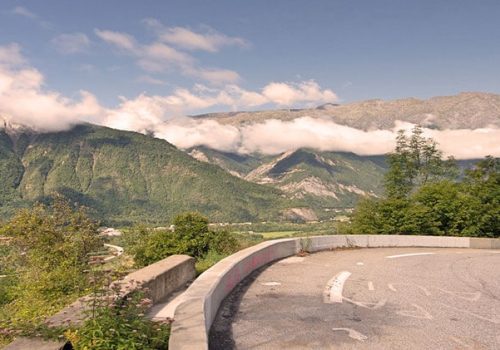 Saw-edged mountains, snow capped peaks and passes conquered by legends, there really is no place quite like the French Alps. Home to some of the most iconic climbing in... 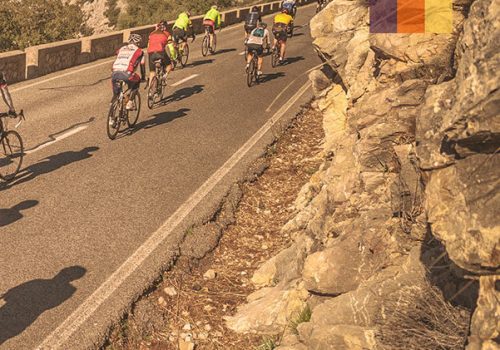 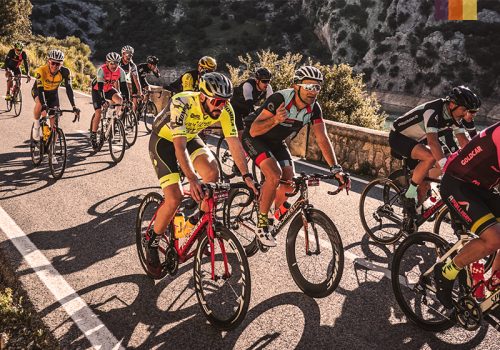 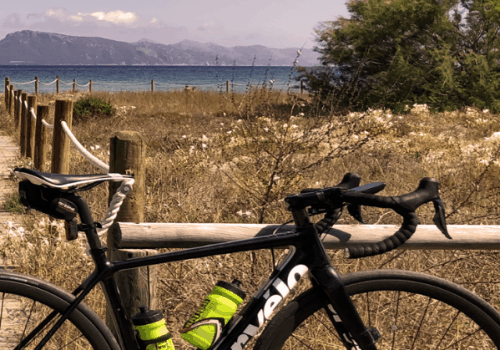