Guide to the Climb from Bedoin

Mont Ventoux is probably the most revered climb in all of cycling. Located in Provence, it towers over the lavender filled plains below it, giving it the nickname of the Giant of Provence.

Ventoux's mythical status doesn't just come from its height or its length, it comes from something much deeper. This is a climb that Tom Simpson famously asked to be put back on his bike, before dying on the mountain. It's a climb that cycling fans will remember Chris Froome crashing into the back of a motorbike on, in 2016 before preceding to try and run up the mountain. Above all though, the Ventoux climb is a cycling route that tests you to your very limits. The gradient never lets up. The landscape is wild and inhospitable and the weather is unpredictable. Mont Ventoux is part of cycling folklore and history and a cycling climb that is on nearly every cyclists' bucket list.

There are three ways up Ventoux but for the purists, it's the ascent from Bedoin which is steeped in history. At 21.5km, you will ascend close to 1,600m with an average gradient of 7.5%. Those are truly staggering numbers and it is why it is an icon of cycling. 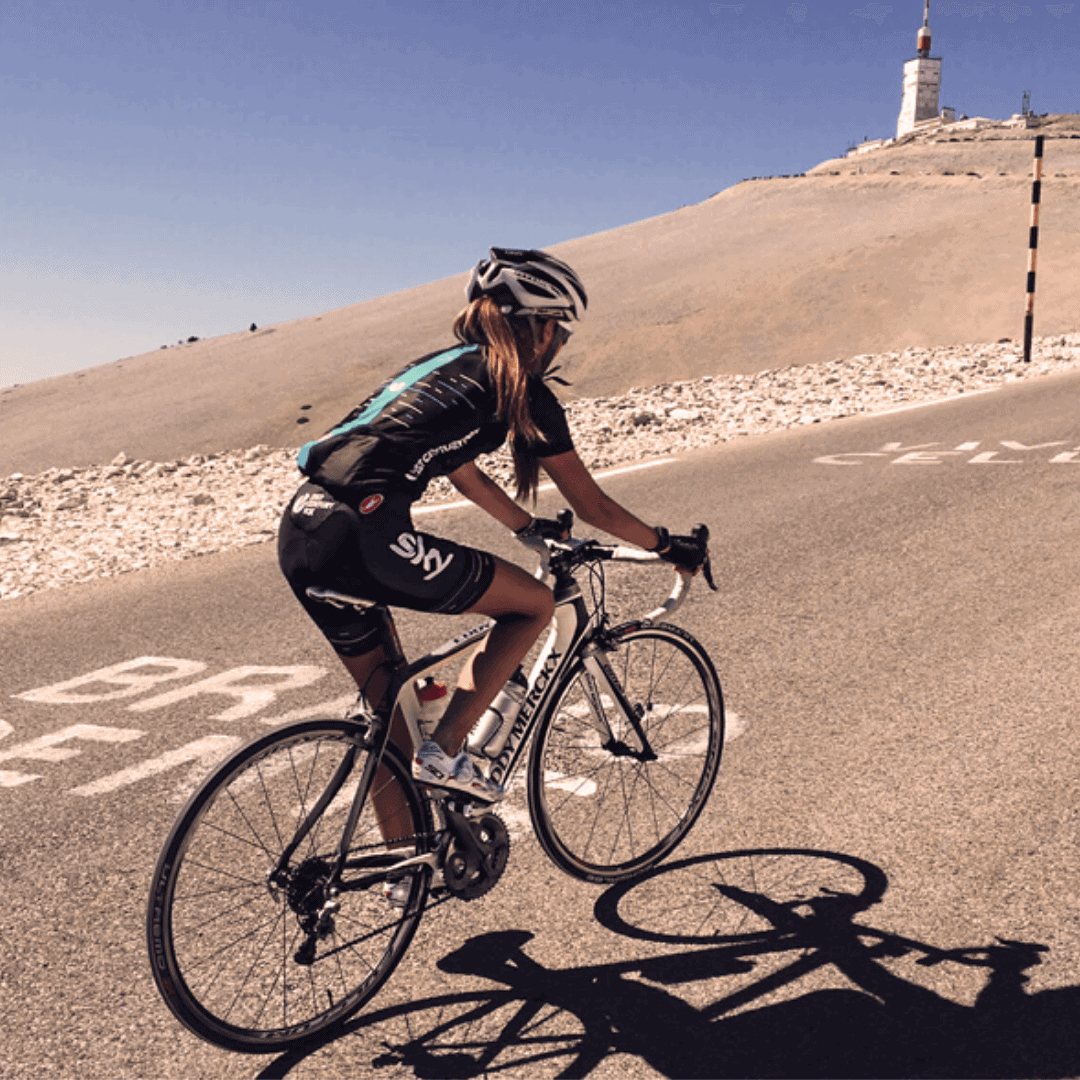 3km from the top and still pushing!

Leaving Bedoin to the forest 0-5 km

The Mont Ventoux cycling climb starts right out of Bedoin, a pretty little town nestled in the heart of Provence. It's difficult to get lost as the first road you will ride is the Route du Mont Ventoux which pretty much does what it says on the tin.

Your first section of the climb is a nice and easy warm up so make sure your cadence is nice and high to get the blood flowing through your legs.  You will ride for approximately 3.5km through the small hamlet of Sainte Colombe before you arrive at the St Estève bend. As you pass through St Estève, the route kicks up and this is where the tough climbing starts and will not end until the weather station at the top of Ventoux.

Your Mont Ventoux route will send you into the forest and it's here that the climb can be mentally very tough. You will really have only just got going but there are no distractions as the road is surrounded by trees from both sides. There are no views and the air is very still as it's so enclosed. Even on days when the mistral is blowing, the forest is relatively protected, especially compared to conditions at the top. The road meanders through the forest with gradients relatively falling below 10%.

There is the occasional switchback or turn where you need to take the outside line as gradients on the steepest parts of the ramp can be 16/17% which are an absolute killer as you climb. The road continues like this for 10km or so meaning at 15kph you're in the forest climbing the first section of Mont Ventoux like this for 45 minutes.

At the end of the forest is the famous Chalet Reynard. It's a former mountain refuge turned restaurant, somewhere to avoid Ventoux's notoriously harsh conditions. It's well positioned to grab some food and water before your last 6km. Whilst, it's only 6km to ride, these might be the toughest you ever encounter. 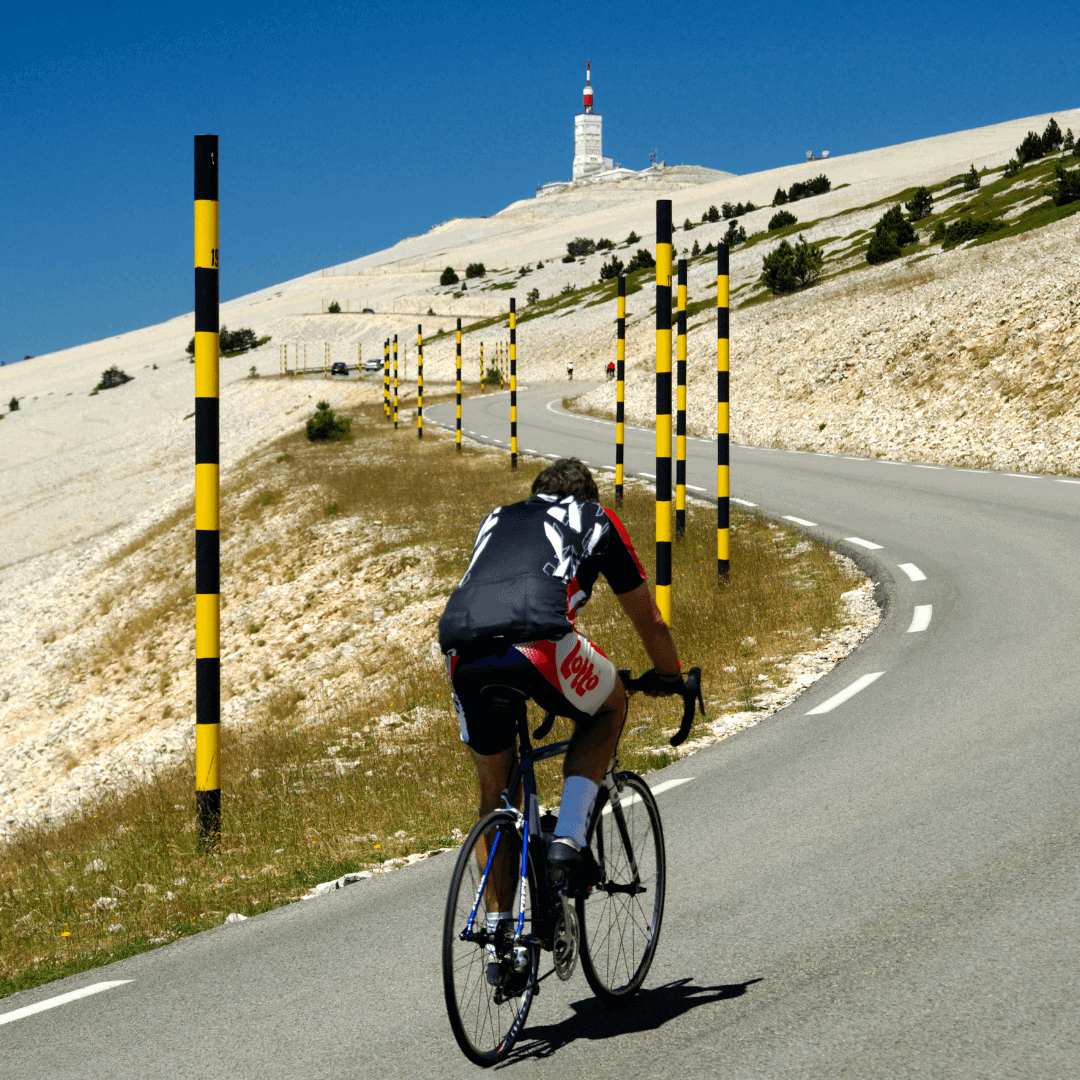 The famous yellow and black poles on Ventoux

You will turn left and the famous yellow and black poles of Ventoux will mark out the road. It's here that the mountain becomes completely exposed to the elements. Mont Ventoux has no other peaks around it and the famous Provencal mistral winds blow at close to 100kph for much of the year at the top. The strongest ever recorded is 320kph which gives you an idea of what you are facing. Ventoux will be closed when the winds are up at 100kph for obvious reasons but even on still sweaty days in the vineyards and orchards below, winds can be brutal at the top.

You will climb steadily for 6km with sensational views over the moonrock landscape and Provence below.

Keep riding and a kilometre or so before the summit you will reach the Tom Simpson memorial. Simpson famously died on the 1967 Tour de France as he succumbed to the deadly mixture of amphetamines, alcohol and exhaustion. Cyclists will often leave a water bottle or something small at his memorial. From here, it's only another 1,500m or so but unless you're incredibly lucky, you will still be battling the winds before you eventually summit Ventoux, beneath the famous weather station. 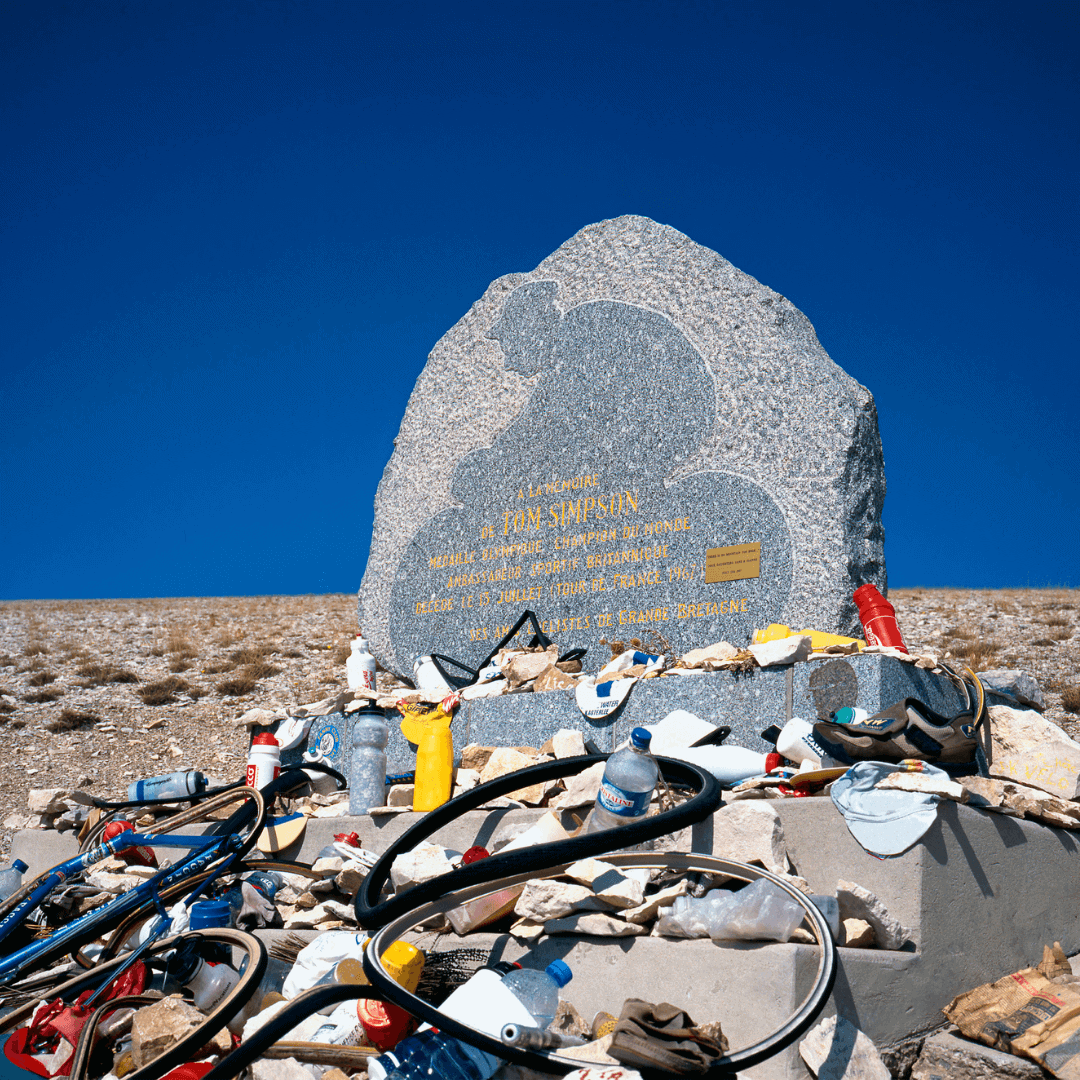 1. Prepare for the Climb

2. Prepare for the Battle

We don't just mean the gradients and the weather. You will need a serious amount of mental fortitude as you ride. The first 10km don't' relent and there's very little to take your mind away from kilometre counting. The final 6km, when you're in touching distance, can feel like the longest 6km in history as Ventoux is just completely exposed to the winds here. It can be lonely pedalling and making up very little distance!

Whatever the weather at the top, it's likely to be hot in the summer months in the fields of Provence. Start early when it's cool and crisp so you don't suffer from heat exhaustion half way up. It's also pretty satisfying sitting with a cold beer in Bedoin at lunchtime having completed one of the toughest cycling climbs in Europe in the morning!

4. Ride at a Sensible Pace

This is an almighty climb and unless you're a Ventoux veteran, we recommend that you take the ride at a manageable pace and don't push too aggressively. Put the bike in a low gear and get your legs spinning to start and try not to select a gear that means you're grinding your way to the top. It's also advisable to wear a heart rate monitor if you train with it, to know how your body is faring as you climb Ventoux.

There's no getting away from how touch the ride is but it also provides you with incredible views that most will never see. Couple that with the sense of accomplishment and there's a lot to enjoy about this feat.

The weather on Mont Ventoux is about as unpredictable as you can imagine. Whatever the weather looks like when you open your window on the morning of your ride, ignore it and check the forecast. You will need a windbreaker at the top for sure but it's also cold irrespective of the winds so take some arm warmers on a hot day and on a cold day, take a jacket and winter gloves for your descent.

How to Ride Mont Ventoux

We send hundreds of cyclists to the mountain each year to take on Ventoux. We have no set departure dates so you can arrive and depart at your leisure. You can spend a few days there are make it part of a longer tour through Provence. Enquire here and we will give you some more information. If you want to ascend all 3 sides of Ventoux in a day which is one of the toughest feats in cycling, then check out the Cingles du Ventoux, literally translated as the 'Crazies'.