Providing arguably the most sensational views in the Pyrenees, the Col d’Aubisque offers one of the best cycle routes in Europe. The Tourmalet usually takes the plaudits but the beauty of the Aubisque is reward enough for this intimidating Pyrenean climb.

Situated in the Pyrenees, south of Pau and Tarbes, the Col d’Aubisque is in the Aquitaine region of France.  This mountain pass connects Laruns to Argeles-Gazost.

Why the Col d’Aubisque?

This is the second most used climb in the Tour de France and has been featured a whopping 60 times. If it’s good enough for the peloton, it’s good enough for us! Many choose to climb Col du Soulor first (total 32km) before the 10km to the summit of Col d’Aubisque at an average gradient of 4.6%. This is one of the attraction of the climb as you can tick off the Aubisque and Soulor on the same day.

One of our favourite reasons to ride this though is that the rugged peaks attract a small micro climate making it an inhospitable place to ride. The looming Pyrenean peaks that rise above the mist and cloud look almost mystical and so even in bad weather, there is a certain gravitas to the climb. You have to be mentally and physically prepared to take on the Aubisque but as you pass small villages and grazing cattle, on almost solitary roads, you’ll know why you chose to climb it. Ride this on our Pyrenees Cycling Holiday. 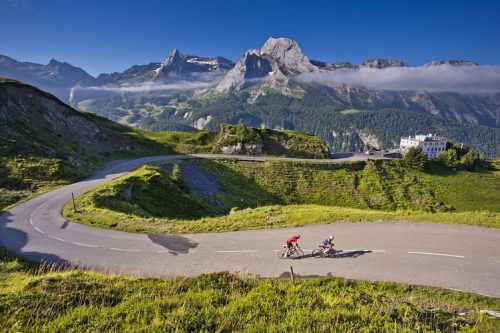 One option is to climb from the east side, tackling the Col du Soulor first and then heading to the summit of the Col d’Aubisque just over 10km away. This is probably our favourite as this route will take you down to the Cirque du Litor, a road cut into the side of the mountain which usually opens up in Spring time and offers some of the finest views you can enjoy cycling in the Pyrenees. From here, it’s 350m vertical ascent to the summit over 7.5km. The final ascent will take you through striking rocky mountains with their majestic rugged peaks.  Don’t forget your lights, as this route will also lead you through a couple of short but dark tunnels.

You can also climb the Aubisque from Laruns on the west side.  This route has an unrelenting gradient averaging 7.2% over 16.6km. The climb starts with a couple of hairpins heading into 4km of gentle riding towards Eaux-Bonnes.  The challenge really begins after then as you head towards Gourette where the gradient remains at  around 10%.  Once you reach Gourette you ride through the beautiful but harsh exposed mountainside before reaching the yellow, green and polka dot bike statues. 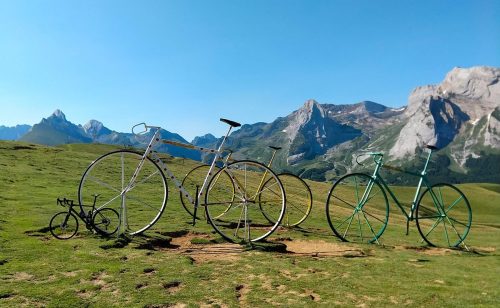 The history of this Col is clearly evident at the top where you will see the bust of the winner of the 1926 Tour, Lucien Buysse and the sculpture of the three bikes in yellow, green and red polka dot. What most don’t know though is there is also a darker part of history that is commemorated.  There is a plaque featuring a gentleman named André Bach at the summit, who was president of the Cyclo Club of Béarn.  In 1943 he was deported by the Nazis to a concentration camp in Germany and died shortly after bing liberated in 1945. Every year the club which is still in existence, holds a ride to the summit in his honour. 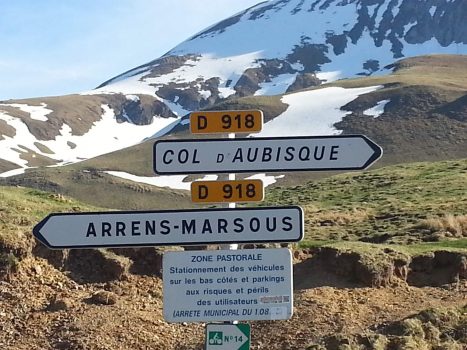 If you have been inspired to cycle the Col d’Aubisque, why not give our cycling specialists a call? Our specialists can help you build your perfect cycling holiday.  Whether you want to join a training camp, use an electric bike, or ride our GPX routes independently, we are able to tailor your trip to you.