The climb begins in the the namesake village or Randa, some 30 kilometres away from Palma. The summit sits at 545 meters above sea level and you will ride to the Santuari de Cura, the oldest Christian holy site on the island, dating back to the 13th century.

In cycling terms, cycling the Coll de Randa is a fairly easy climb compared to many others in Mallorca. It’s short and gentle, less than 5 kilometres in length at an average gradient of 5% and never going steeper than 8%. It’s a nice ascent to spice things up on an easy route over the flatlands of the island, and it has the added bonus of its great views of the distant Tramuntana mountains. It's one of the reasons Mallorca is such a great place for a road cycling holiday. You can ride through the flatlands and enjoy a quick ascent, you can use a climb like the Coll de Randa for a time trial or you can use it as a starting climb before heading to the Tramuntana. 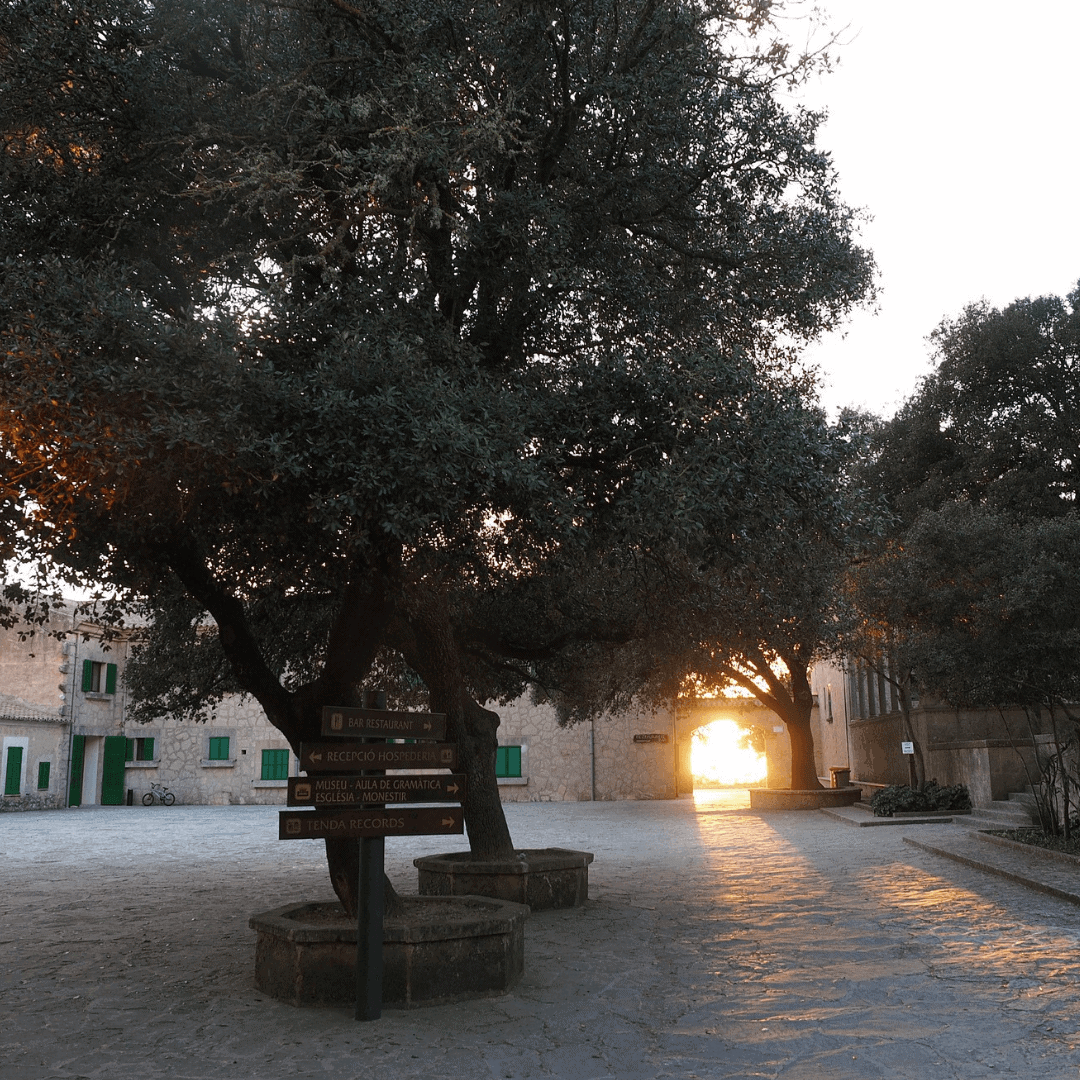 The stone courtyard at the Santuari de Cura

Setting off Towards Randa

The tiny village of Randa is located 30 kilometers east from Palma de Mallorca and 60 km south of Puerto Pollensa. The nearest main town to Randa is Llucmajor just 5 kilometers south. The approach to Randa is beautiful and completely different to what you may be used to in Mallorca if you've only ever discovered the coasts and climbs. Your cycling will take you through orange and almond groves, and on secondary roads with little traffic.

Leaving the Ma-5010 road between Llucmajor and Algaida you’ll get immediately arrive at Randa. The road begins heading up on a 5% gradient a few hundred meters before the official Strava segment. The climb proper starts off right at the beginning of the Ma-5018 road with a signpost indicating “Santuari de Randa”.

After passing by a cafe popular with cyclists, the first few meters run through the narrow quaint streets of Randa surrounded by picturesque old buildings. You won’t have much time to appreciate the architecture and in a matter of a few pedal strokes you will be out of town.

The first part of the climb has a couple of steep ramps but quickly eases into the average 5% gradient for most of the ascent. The road is not wide but it's not as narrow as a climb like Port de Valldemossa.

After the first kilometer you will notice a diversion on the right side of the road that allows you to climb to Puig de Randa through another road. It’s a significantly tougher alternative route with a kilometre and a half at 9% and steep ramps up to 13% over a much narrower surface.

By this point the quaint landscape of Randa has turned into shrubbery and scattered pines, not offering much protection from the weather conditions. The scenery is nothing outstanding until kilometre 2 of the climb, when you’ll reach a narrow hairpin where the view opens to the valley and for the first time you’ll be able to spot the Mediterranean sea in the distance. It's quite a sight as the flatlands dominate this part of Mallorca.

After the hairpin the road offers a brief rest section and kicks up again with easier gradients from here to the summit. From kilometre 3 onwards you’ll get panoramic views all the way to the top of the climb. 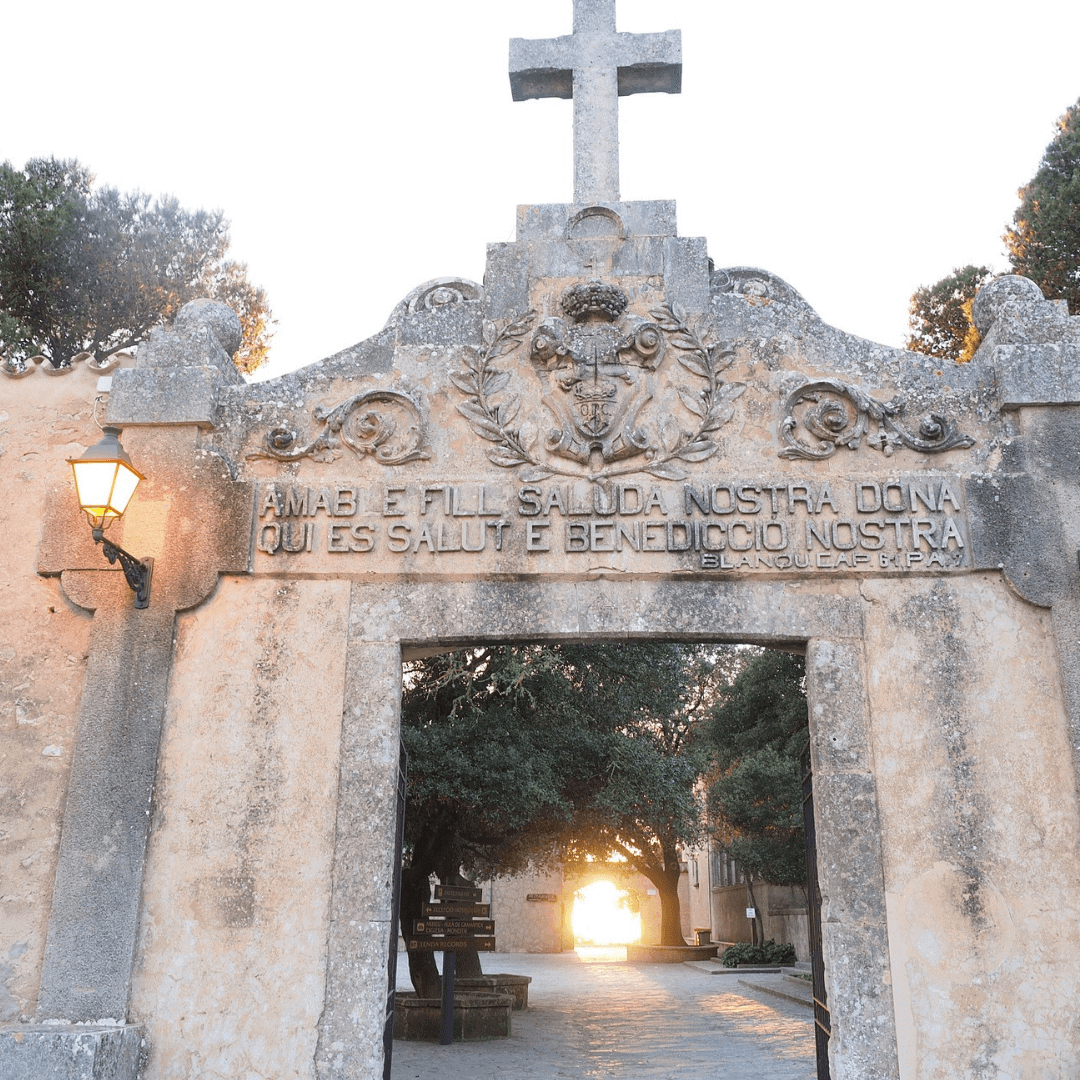 Puig de Randa is not only the highest elevation point in Mallorca outside of the Tramuntana mountains but it's also the highest for miles around it. It naturally offers jaw-dropping panoramic views of the distant mountains and sea.

You’ll know you are almost at the top when you spot the prominent radar station tower, the famous landmark. There’s a signpost indicating the summit at 534 meters of altitude and a few meters ahead you’ll find the famous Santuari de Cura. The sanctuary has been lovingly restored into a boutique hotel and restaurant but if you don't want to stay, you can still explore the stunning stone courtyard and relax in almost complete isolation. Hermits came here in the 13th century to settle and it is not a UNESCO world heritage site. Visit the chapel and enjoy magnificent views all around you.

The descent back to Randa isn’t particularly technical but it’s worth it to slow down and take in the views as you coast peacefully from the holy site.

Coll de Randa is a category 3 climb with an elevation gain of 252 meters. It’s an easy climb by Mallorca’s standards with an even easier and scenic run to the top in the last kilometre and a half.

There aren’t any gradients tougher than 8% along the climb so a standard compact groupset with a 34T-28T gear ratio will be adequate to ride Coll de Randa.

The current Strava KOM time stands just under 10 minutes. For trained amateurs, a time of around 15 minutes is achievable with a full gas effort. This climb is short and shallow enough that it can be attempted on the big ring to clock in a better time.

The Santuari de Randa sees a large number of visitors so the traffic might be somewhat busy at certain times of the day. The road is wide enough to allow for cars (even buses) to overtake cyclists safely and the visibility is great on most of the turns. The tarmac condition might not be the best in Mallorca but is certainly good to grant a safe descent.

The Coll de Randa is a nice ascent to add some climbing efforts to a route across the central flatlands on your cycling holiday in Mallorca. It also has some of the best panoramic views that the island has to offer.

The alternative route that connects with the main road at kilometre 1.4 is significantly tougher but also quieter and it features 16 consecutive hairpins! It’s also worth giving a shot if you are having good legs.

Bar Celler Randa is right by the main road coming from Llucmajor or Algaida, a couple hundred meters from the start of the climb. It’s a popular cyclist pit stop and you’ll always get to meet fellow riders sitting under the sun on the terrace.

The restaurant next to Santuari de Randa is a must-stop to refuel after summiting the climb and enjoy the superb views over coffee and cake.

This is a climb with a shortage of trees by the roadside so it can be quite hot in the central hours of the day. It opens even more towards the highest point so you’ll be likely to face windy conditions as well.

If you enjoyed reading about the Coll de Randa, check out these other great cycling climbs in Mallorca.