If you're cycling the Coll de Femenia, you're either at the end of a big day in the mountains, or about to start some serious Mallorca climbing. The Coll de Femenia grants access to the northernmost region of the Tramuntana mountain ridge linking the towns of Pollensa and Lluc. You will ride it on the way to and from Sa Calobra if you're staying in a cycling hotel in Puerto Pollensa. The quickest way to reach the top of Coll dels Reis (Sa Calobra) from Puerto Pollensa is via Coll de Femenia. It’s barely 35 km away but you’ll get a hefty elevation gain of 1,000 meters before you even ride Sa Calobra.

The climb stretches to the southwest along the popular MA-10 road that traverses the whole mountain range and gives access to the most well known climbs in Mallorca. In fact you can follow this road on an epic Mallorca road cycling route from Puerto Pollensa to Andratx. There’s a much less demanding loop route out and back from Puerto Pollensa that will take you up and over Coll de Femenia to later descend the Coll de Sa Batalla or vice versa, a true classic for any Mallorca road cycling holiday. 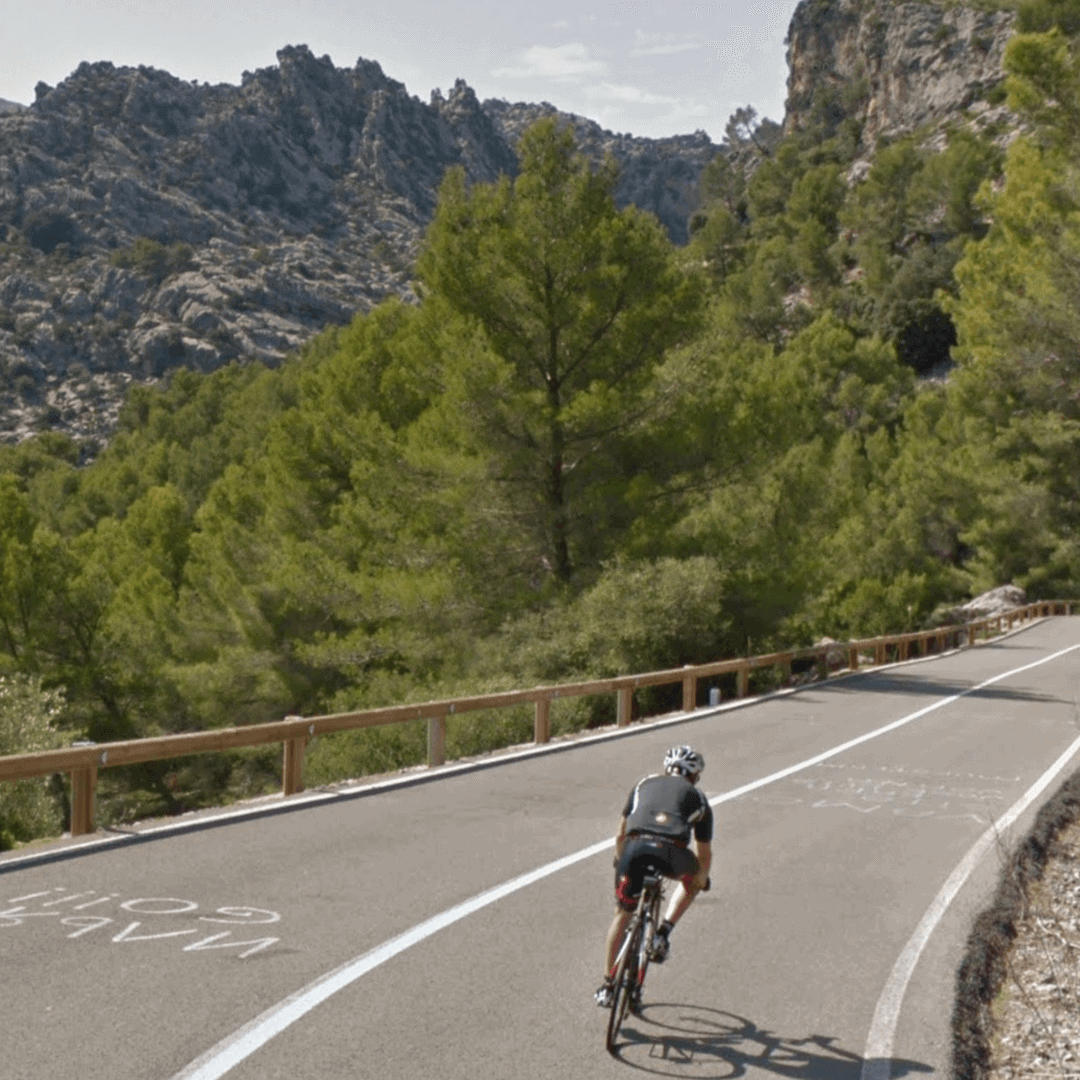 If you're cycling from Puerto Pollensa  you will have to bypass the busy town of Pollensa following the MA-10. Luckily at this point the road is extra wide with enough space to ride two abreast safely but be careful as it's still a busy road leading to the northern coast.

There are almost 5 kilometres of slight drag until the climb proper starts. You’ll see a signpost indicating 7.7 km at 5.5% to the summit of Coll de Femenia. By this point the road gets narrower but the quality of the tarmac remains superb.

Within the first half of the climb the gradients average 6-7% maxing out at 10% on a couple of sections around kilometre 2. There are a couple of wide 180-degree turns with messages painted on the tarmac evoking the atmosphere of professional racing, giving you a bit of a boost!

After the hairpins, between kilometre 2 and 3 there’s an almost-straight section that is particularly exposed to the sun and the wind. The road keeps crawling up gradually surrounded by a craggy terrain with a few pines here and there. There's very little protection but it does allow for great views of the valley. On clear days you should be able to spot Port de Pollensa bay behind you and the Formentor peninsula in the distance.

At kilometer 4 the average gradient drops to an easier 4% including a short downhill section to recover briefly. As you get higher up the climb some ancient oaks and olive trees will appear by the roadsides but they're still not enough to offer a fully shaded ascent.

Over The Top into Lluc

On the last 2.7 kilometres the average gradient creeps up again towards the 5% but it gets fairly inconsistent alternating between easy sections and demanding ramps. You’ll lose sight of the valley and the views but you’ll enjoy the silence of the countryside as you head deep into the Tramuntana.

From the signpost indicating the top of the Coll de Femenia climb you can ride 5 kilometres of undulating terrain until the picturesque town of Lluc. Once there, you’ll be just 1 kilometre from the well known gas station at the top of Coll de Sa Batalla, a nice place to refuel on the route to Sa Calobra or Puig Major.

If you want to head back in reverse, Coll de Femenia’s descent is a joy. Wide turns with great visibility over smooth tarmac allow for great speed without compromising the safety.

The Coll de Femenia is a category 2 climb with an elevation gain of 416 meters. It’s a steady test to get warmed up on your way to the toughest climbs in Mallorca such as Sa Calobra or Puig Major.

There aren’t any particularly hard ramps along the climb so a standard compact groupset with a 34T-28T gear ratio will do in order to ride Coll de Femenia without struggling.

The current Strava KOM time stands under 17 minutes. For trained amateurs, a time of around 25 minutes is achievable with a full gas effort. This climb’s average gradient favours powerful riders with an aero position rather than lightweight climbers.

Traffic in general is not an issue on the Coll de Femenia. The road is wide and allows for vehicles to pass cyclists safely. There’s not much of a road shoulder but the tarmac is in pristine condition all the way to the edges of the road. There might be loose gravel at some corners, and also sheep and goats are not an uncommon sight by the roadside. The visibility is great so you won’t have trouble spotting these but be extra focused at all times if you take on the descent full gas.

The Coll de Femenia is a great climb for training due to the steady gradients, but it will also allow you to take it easy and spin your legs on a big gear if you want a relaxing day on your cycling holiday in Mallorca.

If you are up for an ambitious challenge you can try riding the Andratx to Pollença route in reverse. Following the famous MA-10 via Coll de Femenia and you’ll traverse the Tramuntana ridge on a 115 kilometers ride with nearly 2,500 meters of climbing!

Make sure you have enough food and water with you by the time you have left Pollensa. There won’t be any cafes or shops until 5 kilometres past the summit of Coll de Femenia, in the village of Lluc.

Whether you are riding the loop up Coll de Femenia and down the Coll de sa Batalla or continuing towards Sa Calobra or Puig Major, it’s always a good idea to stop in the well-known gas station 1 kilometre past Lluc. The cycling atmosphere is great and you’ll be able to refuel and even repair any minor mechanical issues on your bike.

Up ahead on the MA-10, Cafe Escorca is the place to stop for coffee and cake just 3 kilometres to the top of Coll dels Reis (Sa Calobra).

The climb is oriented to the Southwest which means it receives plenty of sunlight. That added to the lack of tree shade can make the climb painfully hot if you attempt to ride it at noon on a summer day. Always keep in mind when venturing into the heart of the Tramuntana range that the weather conditions might change quickly so it’s highly recommended to carry a lightweight jacket or a gilet in the pocket.

If you enjoyed reading about the Coll de Femenia, check out these other great cycling climbs in Mallorca.