Cycling Port de Valldemossa is similar to riding a mini version of Sa Calobra. It's a climb you will only ride if you descend it first but it's smaller and far less busy. Valldemossa is in the heart of the Tramuntana. It is south of most famous cycling climbs in Mallorca includign Sa Calobra and Puig Major. The climb out of the tiny coastal town of Port the Valldemossa has everything that Mallorca’s most famous road cycling climb offers. Meandering hairpins zigzag over rugged mountainous terrain with panoramic views of the Mediterranean. It's just a much shorter climb than the more famous Mallorca cycling routes and is certainly less hyped.

You can ride ride the Port de Valldemossa climb quite easily on the epic ride from Andratx to Port Pollensa but you can also ride it from the outskirts of Palma. It's approximately 50 km with 1,000 meters of  elevation and if you choose to ride back to Palma on the coast, you can take the well-known MA-10 across the Tramuntana ridge and clock up 100km with 2,100 elevation. 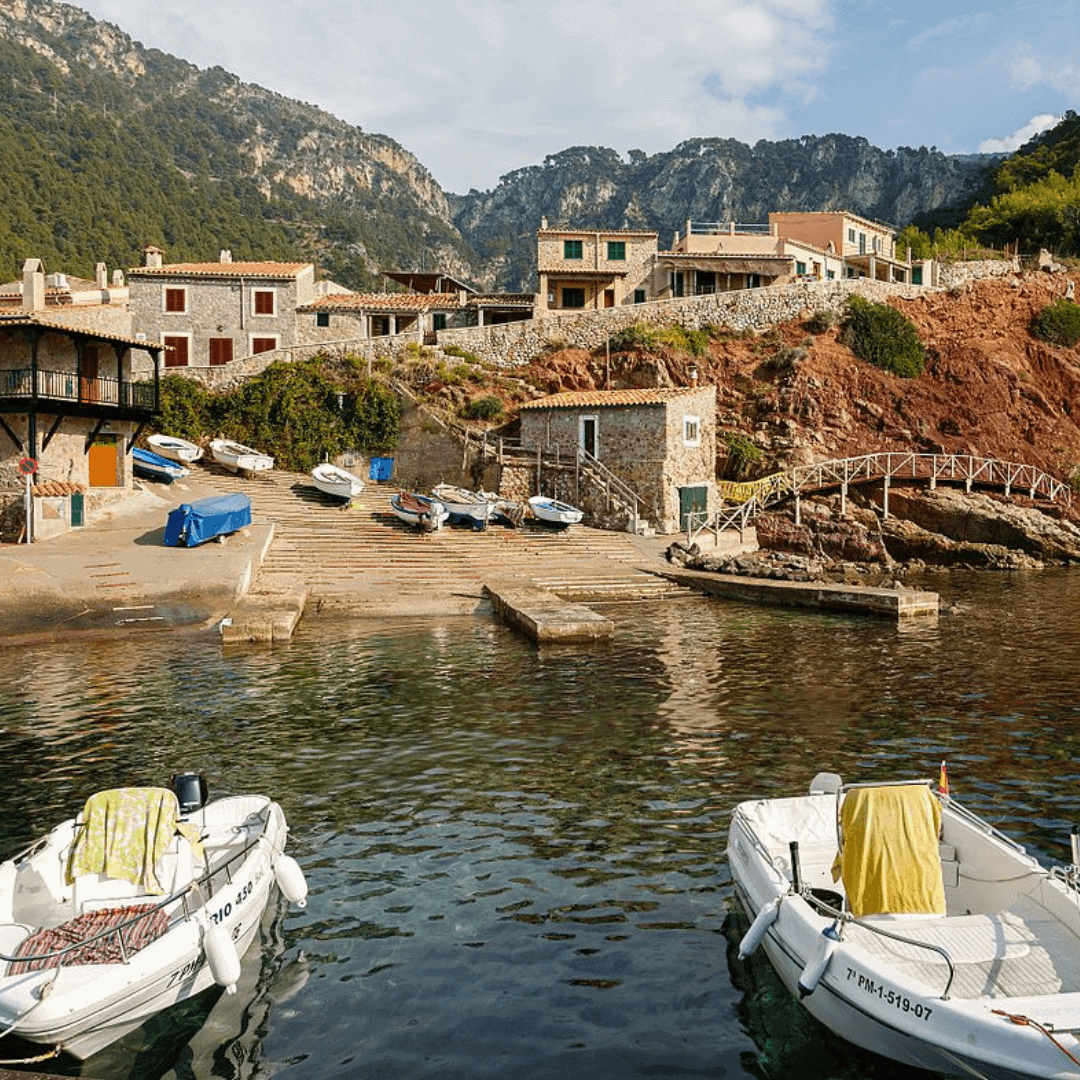 From Palma, there’s a pretty straightforward cycle into the town of Valldemossa. The town is less than 20 kilometres away following the MA-1110 road. The road heads north on a continuous false flat uphill until the last 3.5 kilometres when it really kicks up averaging 5% with short ramps of 10%.

Once you're in the picturesque town of Valldemossa, keep riding a couple of kilometres and take a right turn into the MA-1131. A few hundred meters later you will be at the top of the climb. Very much like Sa Calobra, the climb from Port de Valldemossa must be descended before climbing it, so you’ll get a nice opportunity to scout every section of the road prior to tackling the ascent.

Starting off on the Shore

A 5-kilometer downhill will take you to the small harbour of Port de Valldemossa. The Strava segment for this climb starts right off from the shore with the first few meters over some big cobbles.

The road is beautifully narrow and you’ll get a feeling of climbing right from the start. Hairpins arrive within the initial few hundred meters so you'll quickly enjoy scenic views of the sea and the nearby cliffs. Within a kilometre the road will get covered by a thick layer of pines and the ocean will disappear behind you as you head into the heart of the mountain.

Between kilometres 1 and 2.5, you’ll find the longest straight sections of this climb as the road crawls up hanging from the side of a steep narrow gorge. Despite having two lanes painted, the tarmac strip is barely wide enough to fit a car and a bicycle, so be mindful for vehicles coming down the road. 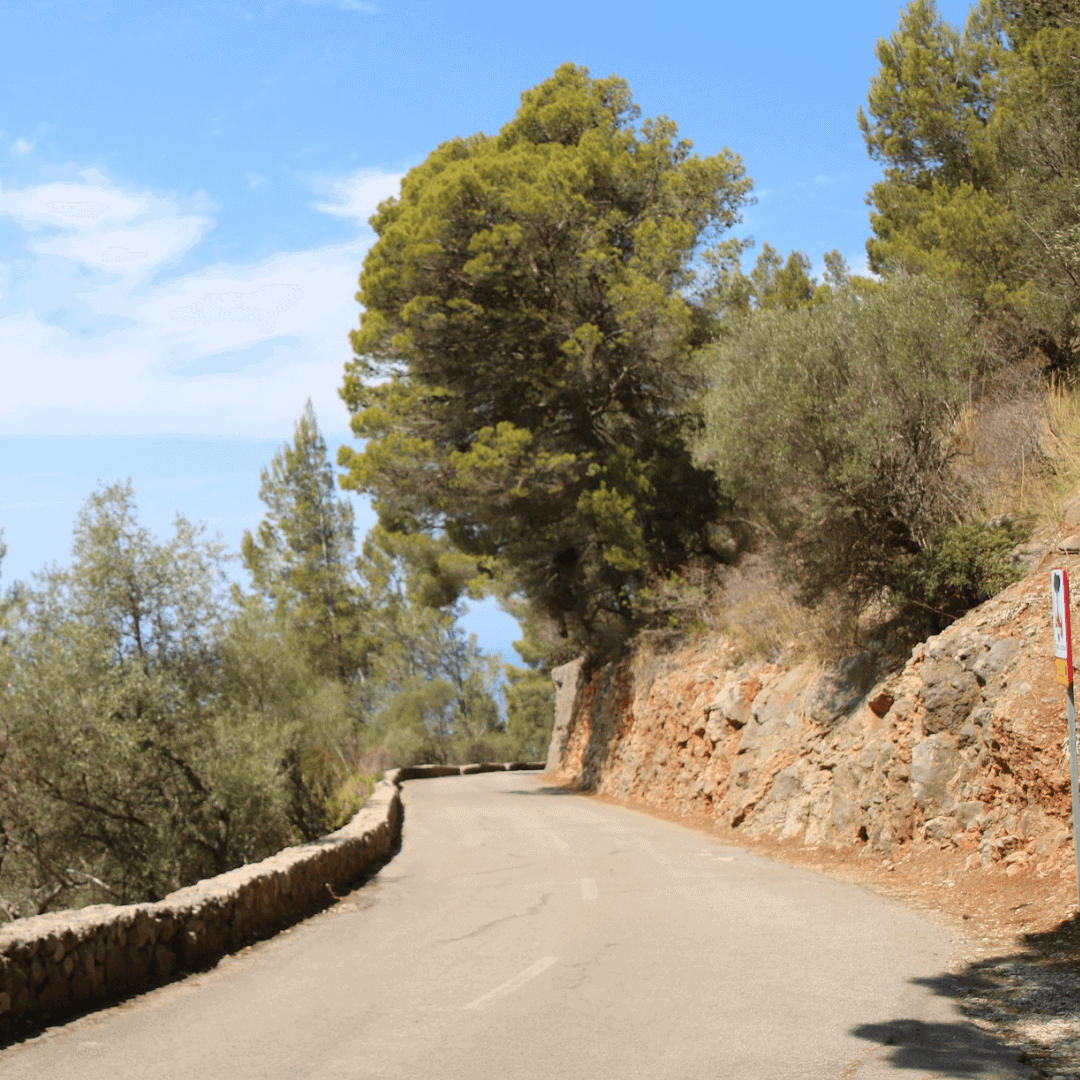 Hairpins to the summit

Halfway through the climb you’ll get to the first of 6 consecutive hairpins. The vegetation opens up here allowing for stunning views of the coastal landscape. Stay clear of the inner line of the turns as it’s the steepest part and has the most damaged surface.

After the last narrow turn there is just 1 kilometre remaining to the top. It’s almost a straight run to the summit with unparalleled views on your right, and steep bare rock walls on the left. Even if you are suffering with the relentless average gradient of 7.5% keep pushing to the top.

The ascent from Port de Valldemossa is a category 2 climb with an elevation gain of 366 meters. It’s on the short side compared to other cycling climbs in Mallorca but it’s steeper than many.

You will find steep ramps of 10-12% and even higher percentages on the inside line of the hairpins. For this reason it could be a good idea having an extra 30T or 32T sprocket on your cassette.

Although the KOM on Strava shows an outrageous time of 13:26, it would require a strong 4 Watts per Kilogram to get close to a 20 minutes ascent.

This climb is located in a particularly remote and isolated area of Mallorca so don’t expect the smoothest type of tarmac. On the bright side the traffic is minimal and you won’t see any of the tourist buses of Sa Calobra.

The descent into Port de Valldemossa is not one to be taken lightly. The steep cliffs and some of the narrowest roads in Mallorca advise you to go easy and not take too many risks.

Es Port de Valldemossa is a local restaurant placed right at the beginning of the climb with a nice terrace open to the bay. Serving local breakfasts, coffee, and cake it’s an ideal spot to refuel mid ride. Just beware of overstaying and getting too cold, the climb kicks off right there and it won’t be easy to get into climbing pace after a long break. It's a good place for a quick espresso though.

Past the summit of the climb, the village of Valldemossa it’s another fantastic place to stop for a coffee or a cake. Specially picturesque it’s the main avenue with French cafe tables lined under big floral trees over a quaint stone pavement. 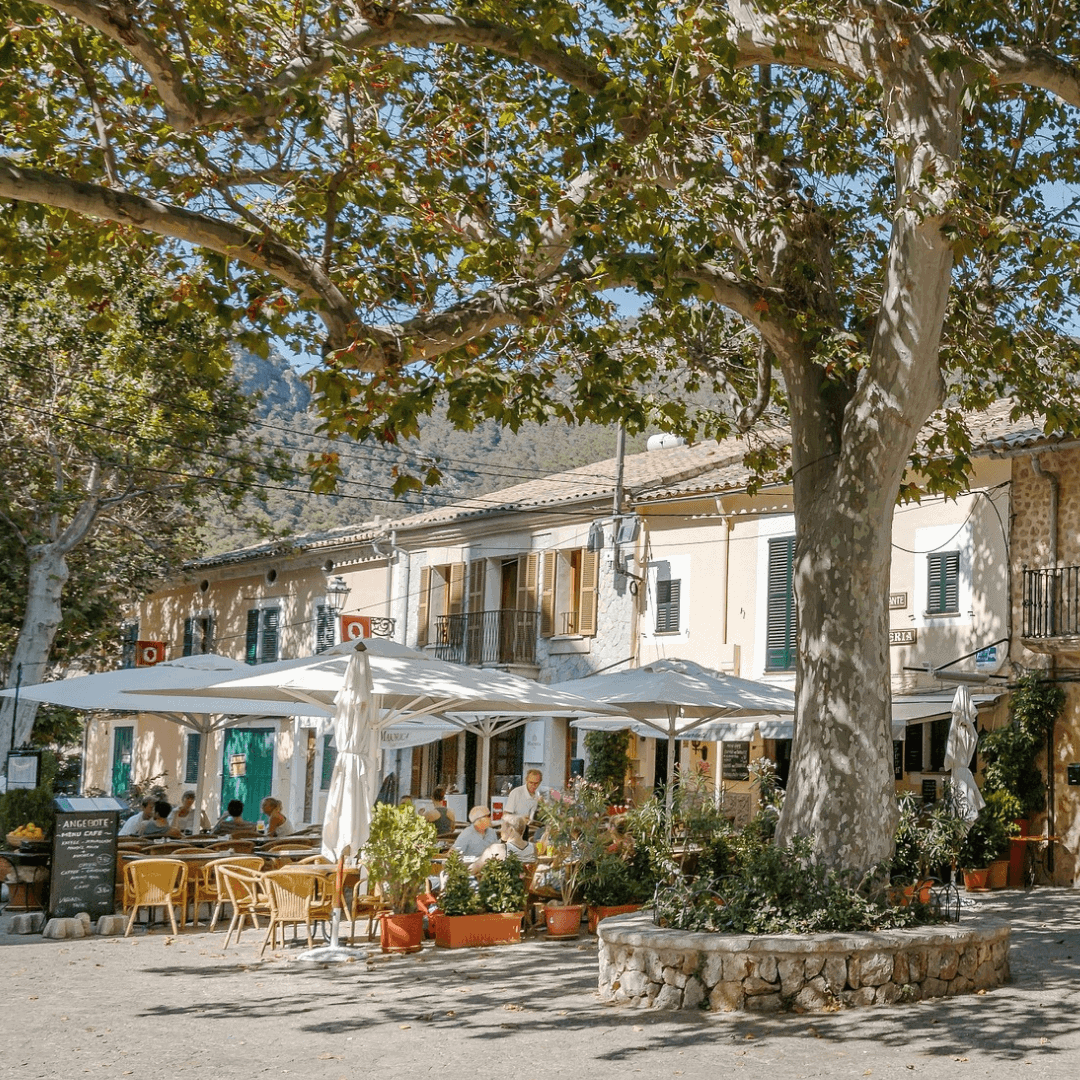 The terraced restaurants in Valldemossa

Port de Valldemossa is a Mallorca cycling climb that can be ridden pretty much at any time of the day. There are plenty of trees on both sides of the road to protect you from the sun and windy conditions. The climb is in the heart of the Tramuntana so you might be riding this as part of a longer Mallorca cycling route. If you are, ride the climb early so that you can conquer other climbs in the area without it being too hot.

If you enjoyed reading about the Coll de Soller, check out these other great cycling climbs in Mallorca.