Cycling The Coll d’Honor in Mallorca

Cycling the Coll d'Honor is not the steepest or longest climb you will cycle in Mallorca but it's one that will open up a door to the quiet Tramuntana mountains. It is in many ways a classic Mallorca cycling climb with a slim road snaking its way up through a narrow valley, and surrounded by plenty of Mediterranean pine.

The Coll d’Honor climb starts in the quaint village of Bunyola, just 15 kilometres away from Palma and barely 4 kilometres away from the beginning of Coll de Sóller’s southern ascent. That means you can easily tick off two of the top Mallorca’s road cycling climbs in just one morning setting off from Palma or the surrounding flatlands. If you're cycling from Port Pollensa, you can access this climb as part of an epic Mallorca cycling route through the mountains, although you will be riding it from the other side. 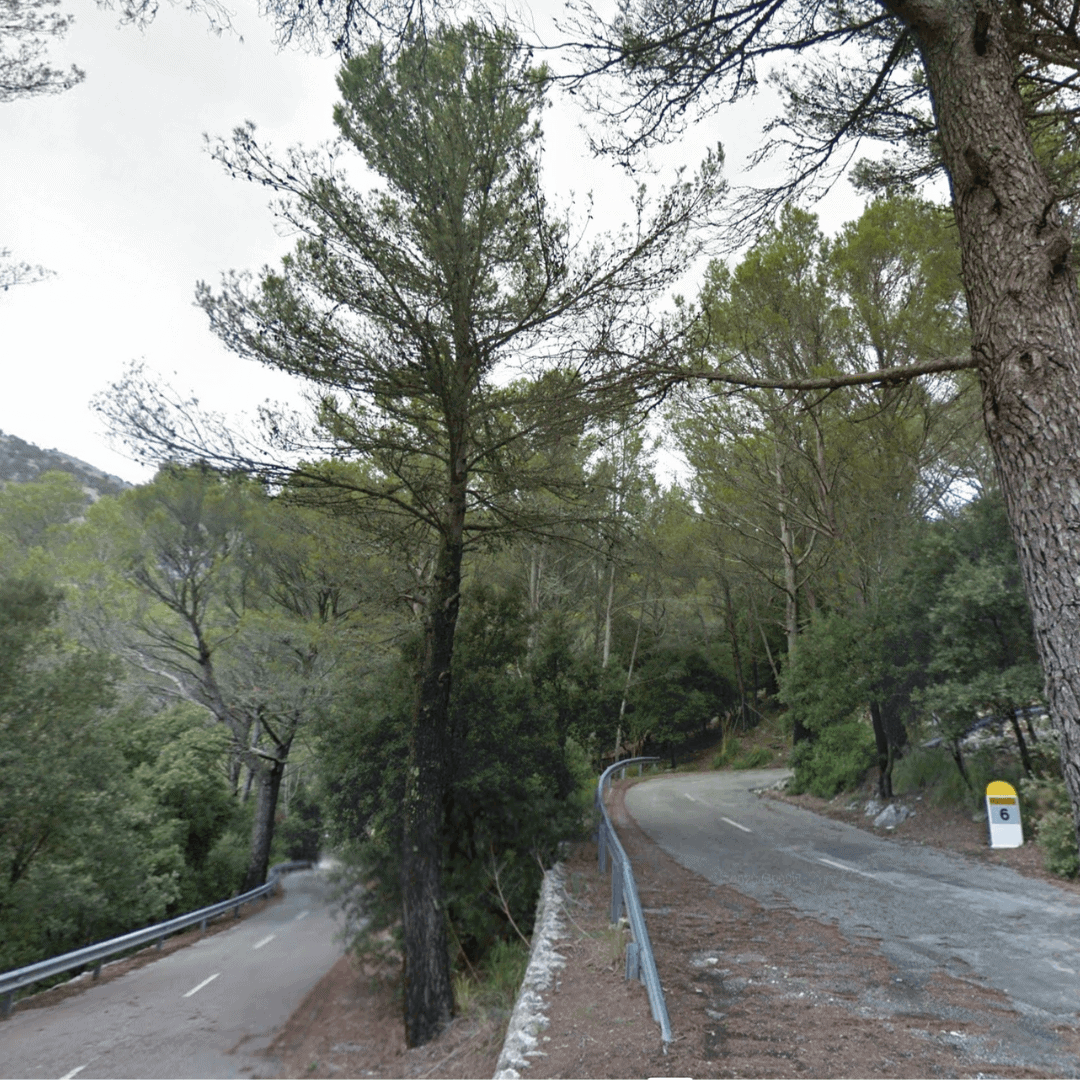 Switchback half way up the Coll d'Honor

The easiest way to reach Bunyola from Palma is the MA-11 road, which will give you a nice warm up of around 15 kilometres. Then, at a roundabout, you’ll see a sign to take the first exit into the MA-2010 and you’ll get to Bunyola in 1 kilometre.

There’s a full Strava segment of 6.2 kilometres that starts right in the centre of the village, when turning left into the road MA-2100. However, the signpost indicating the start of the climb doesn’t come until 800 meters later.

Immediately out of Bunyola, the climb feels like a slight drag until kilometre 1 when it suddenly kicks up fiercely with gradients up to 12%. You’ll quickly discover that the quality of the tarmac isn’t the best, especially at the side of the road

This first part of the climb isn’t steady either, alternating steep ramps with rest sections as you make your way through a quiet valley surrounded by pines and oaks.

Unlike the stunning views of most of Mallorca’s climbs, the Coll d’Honor doesn't offer particularly scenic views. You will be mainly climbing through woodlands with views of distant cliffs in front of you and the climb is ideal if you want to put in some training efforts.

After the second kilometre you’ll reach a couple of nasty hairpins and from there on the road goes up relentlessly at a steady 6-7%. Until kilometre 4 it’s almost a straight run that will feel like never ending if you are going full gas at this point.

The gradient doesn't let up for the last couple of kilometres but the road will feature a number of turns that will allow for a change of perspective. The last few meters are the most difficult with ramps going briefly above 10%.

Over The Top & Descent

The summit of the Coll d'Honor stands at 550 meters and immediately drops into the other side with a fast and twitchy descent towards the town of Orient.

It is possible to tackle Coll d’Honor in reverse from the valley of Orient but it is a much shorter climb of 2.7 kilometres at 4.7% average gradient. It does feature, however, a steep 100-meter section at 11% in the middle that will surely blow the cobwebs out of your legs if you aren’t properly warmed up.

The descent into Bunyola isn’t overly technical but it will require certain precautions. Stay away from the sides of the road and the inside line on the hairpins as these present the most damaged surfaces.

The Coll d'Honor is a category 2 climb with an elevation gain of 335 meters. It’s not the longest but the last 4 kilometres at 7% are not easy by any means.

A standard compact groupset with a 34T-28T gear ratio will suffice to ride Coll d’Honor comfortably, but an extra 30T sprocket will come in handy on the steepest ramps.

Coll d’Honor from Bunyola is one of the best training climbs in Mallorca, not only thanks to its steady 6-7% gradient (after kilometre 2) but it’s also long enough to allow for a 20-minutes flat out effort if you want to perform an FTP test.

Traffic on the Coll d’Honor is minimal compared with other Mallorca cycling climbs, as the road leads to the isolated rural town of Orient in a secluded valley. That's also the reason why the tarmac quality is one of the poorest in Mallorca but it's nothing to be afraid of if you avoid excessive speed and don’t take risks on the descent.

The well-known route Mallorca cycling route from Port de Sóller to Orient is a must if you are on a cycling holiday in Mallorca. On this cycling route, you will tackle the Coll d’Honor as well as the iconic Coll de Sóller from its two sides. The ride is approximately 60 kilometre with over 1,300 meters of elevation and almost a hundred hairpins!

Bunyola’s market square is a convenient and pleasant spot to grab a quick snack and an espresso before cycling the Coll d’Honor. Make sure you tuck extra sustenance into your pockets if you are going to smash it uphill, there aren’t any shops or cafes at the top of the climb.

Over the top and all the way down the other side you’ll get to the picturesque village of Orient, where you’ll find a couple of authentic restaurants suited for a mid-ride light lunch before heading back to Palma or to ride the Coll de Sóller. If you do the latter, you’ll find another couple of local restaurants conveniently located at the top of the climb.

If you keep riding on the same MA-2100 road instead of turning back to Coll d’Honor you’ll descend Coll d’Orient into Alaró, another town with plenty of choices to refuel en route.

Despite the continuous tree shading, the climb orientation to the south means that it can be quite hot in the central hours of the day (especially during Summer) so you should avoid those. When getting into the valley of Orient the weather conditions might change quickly so it’s not a bad idea to carry a lightweight jacket or a gilet tucked in your pocket.

If you enjoyed reading about the Coll d'Honor , check out these other great cycling climbs in Mallorca.